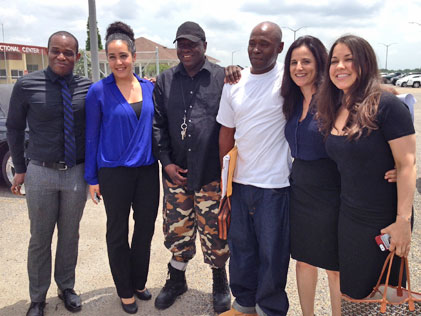 
Nathan Brown walked out of a Louisiana state prison a free man today after a Jefferson Parish judge overturned his conviction for attempted rape. Results from DNA testing of crime scene evidence proved that he is innocent and matched to an alternative suspect, a man who is currently serving a sentence for a felony in Mississippi and who, at the time, lived only a few blocks away from the crime scene. Brown served nearly 17 years of a 25-year sentence for a crime that he did not commit.

In August 1997, a woman was walking through the courtyard of her apartment building when she was attacked from behind and thrown to the ground. The assailant bit the victim’s neck, ripped her dress open and took her purse before she was able to fend him off by striking him with her high heels, which she was carrying. The victim saw him flee on a bike shortly before reporting the incident to a police officer who had been called by neighbors who heard her screams.

The victim, who was white, told police that she had been attacked by a black man who was wearing black shorts and no shirt. She also said the man had a very strong body odor. The victim believed her attacker lived outside of the apartment complex, but a security guard for the complex directed police to Brown, one of few black people living in the apartment complex.

Police knocked on Brown’s door just minutes after the crime. He was in his bedroom wearing pajamas, rocking his young daughter to sleep. The officers conducted what is called a one-on-one “show-up,” a highly-suggestive identification procedure in which a single suspect is presented to the eyewitness at either the site of the arrest or near the site of the crime.

Brown was told to get dressed. He changed out of his pajamas into black shorts and was taken outside to the victim who was waiting in a patrol car. Brown had no shirt on. The victim was asked to get out to take a closer look and to smell Brown, at which point she identified him as her assailant. Although Brown did not have strong body odor, but rather smelled of soap, she explained at trial that she believed he must have taken a shower and that meant he was her attacker.

Brown’s mother retained a private lawyer to represent him. His lawyer met Brown for the first time on the day his trial was set to start. At trial, the victim claimed that she recalled seeing a tattoo with the letters “LLE” on the assailant’s chest, but a police officer testified that the victim didn’t mention anything about the tattoo until after the show-up (during which Brown did not have a shirt on exposing a “Michelle” tattoo on his chest). Brown testified in his own defense and told the jury that he was at home caring for his “fussy infant daughter” at the time of the crime. Despite the fact that four relatives who were at home with Brown that night testified as alibi witnesses, Brown was convicted in less than a day. He was sentenced to 25 years in prison without the possibility of parole for the crime of attempted aggravated rape.

“Mr. Brown’s mother paid for an attorney who it appears did almost nothing to prepare for the trial,” said Emily Maw, director of the Innocence Project New Orleans. “Unfortunately we have seen that happen far too many times here in Louisiana. Of the 41 people who have been exonerated in Louisiana, more than two-thirds had less than effective defense lawyers.”

Brown has maintained his innocence throughout the past 16 years and contacted the Innocence Project to help prove that he was wrongly convicted. With the consent of the Jefferson Parish District Attorney’s Office, the Innocence Project conducted DNA testing of a stain where she was bitten on the shoulder of the dress the victim was wearing. The stain tested positive for saliva and yielded a full male DNA profile that excluded Brown. This profile was consistent with male DNA found on three other areas of the dress, including the front where the assailant ripped it open. The profile was entered into the federal DNA database and there was a match to an offender convicted of a felony in Mississippi, who is a black male and, at the time the crime happened, was a 17-year-old living within blocks of the complex where the victim was attacked.

Eyewitness misidentification is the single greatest cause of wrongful convictions nationwide, playing a role in nearly 75 percent of the 316 convictions overturned through DNA testing. Barry Scheck, co-director of the Innocence Project, said Brown was “another victim of an unduly suggestive police show-up procedure.”

“There are best practices to minimize the risk of misidentification from a one-on-one show-up, and we’re hopeful that this case will inspire law enforcement in Louisiana to adopt the procedures recommended by the International Associations of the Chiefs of Police,” says Scheck.