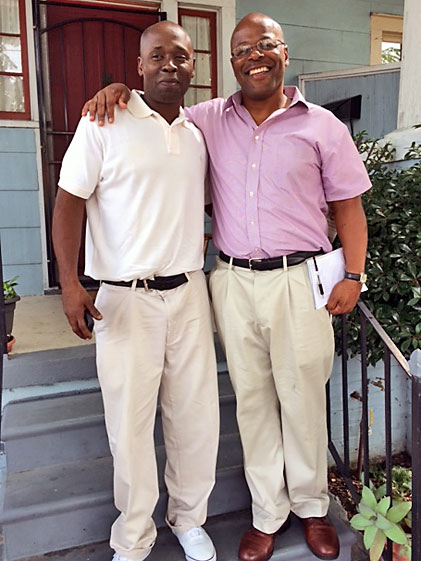 
Nathan Brown was released yesterday from a Louisiana state penitentiary after serving nearly 17 years for an attempted rape that he did not commit. The Innocence Project and

, Brown was met yesterday by his daughter, his uncle and a group of other relatives as he arrived at the office of Innocence Project New Orleans yesterday afternoon. The

reports that Brown held his 1-year-old grandson for the first time yesterday. He said, “It’s really a relief mentally, physically, to be free from serving time for a crime that you did not commit. . . . It was hard. It wasn’t no easy task being in prison for 17 years for something you had no knowledge of. . . . Being in prison is just stressful living. You’re constantly being oppressed.”

Brown was convicted and sentenced to 25 years in prison based largely on the victim’s misidentification of Brown, which was made during a one-on-one show-up identification procedure — known to be problematic because of its highly suggestive nature — conducted by the Jefferson Parish Sheriff’s Office. Brown had an alibi for the time for the crime; he had been with his family, but the jury still found him guilty during his one-day trial in late 1997.

Vanessa Potkin, senior attorney with the Innocence Project and one of the lawyers to represent Brown, told the

: “A lot went wrong in this case. A crime happened, and there was a rush to judgment. No one stopped and scrutinized on any side. People just didn’t hear his screams that he was innocent.”

Brown was unsuccessful in getting assistance from the various judges, attorneys and legal schools and clinics he contacted to appeal his case. He finally reached out to the Innocence Project in 2013. He told WWLTV.com that he never gave up faith that he would eventually be exonerated. His eldest daughter told the

Brown said that he doesn’t hold any bitterness against the victim, despite the challenging life he faced in prison. He said, “She was attacked. It was a terrible thing that happened to her. She was a victim, and I harbor no hard feelings to her. I wish her well. I wish she could find comfort in knowing that the guy that really committed this crime will be brought to justice.”

As for his plans now that he is a free man, his first order of business yesterday was to enjoy a good barbeque dinner with his family.

Innocence Project New Orleans said that it will help Brown to file for compensation from the state.


Watch a video on the case