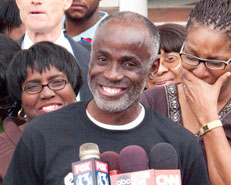 Nearly three years after Florida inmate James Bain became the longest serving DNA exoneree when he was released after 35 years, he’s putting his case behind him and is looking toward the future, reported

. He spoke to an audience at Florida Southern College on Tuesday as part of a program organized by the


“What can I do about yesterday? I can only live for tomorrow.”

With a mixture of humor, candor and Southern manners, Bain spent a couple of hours Tuesday with college students, professors and community members talking about justice, forgiveness, family and cars.

Bain was wrongfully convicted of a 1974 rape and kidnapping and sentenced to life in prison. After a

made it possible for certain cases to be reopened for DNA testing in 2001, he presented motions for the DNA evidence in his case to be tested. When the testing was finally granted, he was

in December 2009. Since his release, Bain married and

, James Jr. He is currently writing a book about his wrongful conviction.