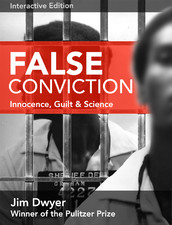 
, that he wrote in collaboration with the Innocence Project and the New York Hall of Science.

with Innocence Project Co-Directors Barry Scheck and Peter Neufeld, discusses eyewitness misidentification among the other factors of wrongful convictions that are covered in the new interactive book.

“We’ve all seen the people with the hazmat suits on, and the big gloves, and the crime scene tape,” Dwyer tells

, “but none of that is used when a witness is asked to look at a lineup or when a suspect is interrogated. And it’s important to recognize that things can happen that influence or contaminate the person’s identification or can be suggested to a suspect in the course of an interrogation.”


Listen to the podcast