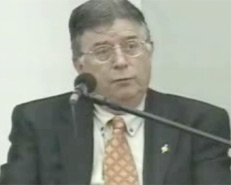 (March 13, 2008) At a hearing this morning in Macon, Mississippi, Innocence Project client Levon Brooks was finally cleared of all charges relating to a heinous child murder for which he served the last 15 years in prison. Brooks (below, right, with Innocence Project Co-Director Peter Neufeld) was sentenced to life in prison for the1992 murder of his ex-girlfriend’s three-year-old daughter after false forensic testimony implicated him in the crime. Another Innocence Project client, Kennedy Brewer, was sentenced to death for a similar child murder in the same town 18 months later.

DNA testing on evidence from the crime scene in Brewer’s case implicated another man in the crime. The DNA profile matched a local man, who later confessed to killing both children alone. The DNA testing, combined with the confession, led to the release and exoneration of Brewer and Brooks – and raised dozens of serious questions about the way forensic science is performed in Mississippi. Now, as Brooks and Brewer try to rebuild their lives, they hope their cases will help improve the criminal justice system that failed them so terribly.

The medical examiner who performed both autopsies, Dr. Steven Hayne (above), is not properly board-certified and does not comply with basic professional standards. The bite-mark expert, Dr. Michael West, has been expelled from professional associations and roundly discredited. Findings of both Hayne and West (who have frequently collaborated on cases, as they did in Brewer and Brooks’ cases) have been overturned multiple times in court because they are not based on science or facts.

"Levon Brooks’ long nightmare is finally over, but we are just beginning to uncover the extent of forensic misconduct that led to his wrongful conviction and countless others across Mississippi," Neufeld said after today’s hearing. "For the public to have any confidence in the state’s criminal justice system, Steven Hayne and Michael West must be held accountable and must be prevented from testifying in future cases."


The ripple effects of both cases are just starting to be felt:

• The Innocence Project formally requested last week that 23 Mississippi officials provide documentation on autopsies performed by Steven Hayne in state labs. Hayne conducts 80% of all criminal autopsies in Mississippi, earning him more than $1 million a year. The Innocence Project is seeking to determine the extent to which Hayne is using federally-funded facilities to perform work fraught with negligence and misconduct.

• An editorial in a leading Mississippi newspaper on Sunday called on officials to release the requested documents to the Innocence Project.

. The full Senate subsequently passed the bill unanimously, and it now goes to the House. This is a critical step forward for Mississippi – one of just

in the nation that do not have a law granting post-conviction DNA testing.

• Leading newspapers in the state have called for meaningful statewide reforms in the aftermath of Brewer and Brooks’ cases. A recent editorial in the Jackson Clarion-Ledger said the state needs to increase resources and oversight of forensic labs.

A recent editorial in the Hattiesburg American said Mississippi “is far behind where it should be” because it does not have a law granting post-conviction DNA testing or other critical reforms that address and prevent wrongful convictions.

• The President of the Mississippi State Medical Association joined the call for a State Medical Examiner to be appointed – and said Hayne should be marginalized further by the medical community. “There’s got to be something we as a group of doctors can do to blow the whistle on this guy,” Dr. Dwalia South said.

• Hayne, who claims to conduct 1,200 to 1,800 autopsies a year (six times the professional standard and 80% of all autopsies in Mississippi), faces increasing scrutiny for his practices. He flunked his board-certification exam years ago and has falsified his credentials while testifying in cases over the last couple of decades. Colleagues and leaders in the field have called his work “near-total speculation” and “complete malpractice.” For more on Hayne, read Reason Magazine Senior Editor Radley Balko’s investigative report

• The District Attorney who prosecuted both men said recently that West had not yet been discredited at the time of both trials, which is untrue. In fact, at the time of Brewer’s trial, West had already been suspended by professional forensic associations and had resigned from other under the threat of expulsion. New reports suggest that West (sometimes in conjunction with Hayne) may have contributed to countless wrongful convictions.

In the days and weeks ahead, check the Innocence Project’s

for more developments on efforts to implement critical reforms in Mississippi and hold West and Hayne accountable for their role in these cases and others.