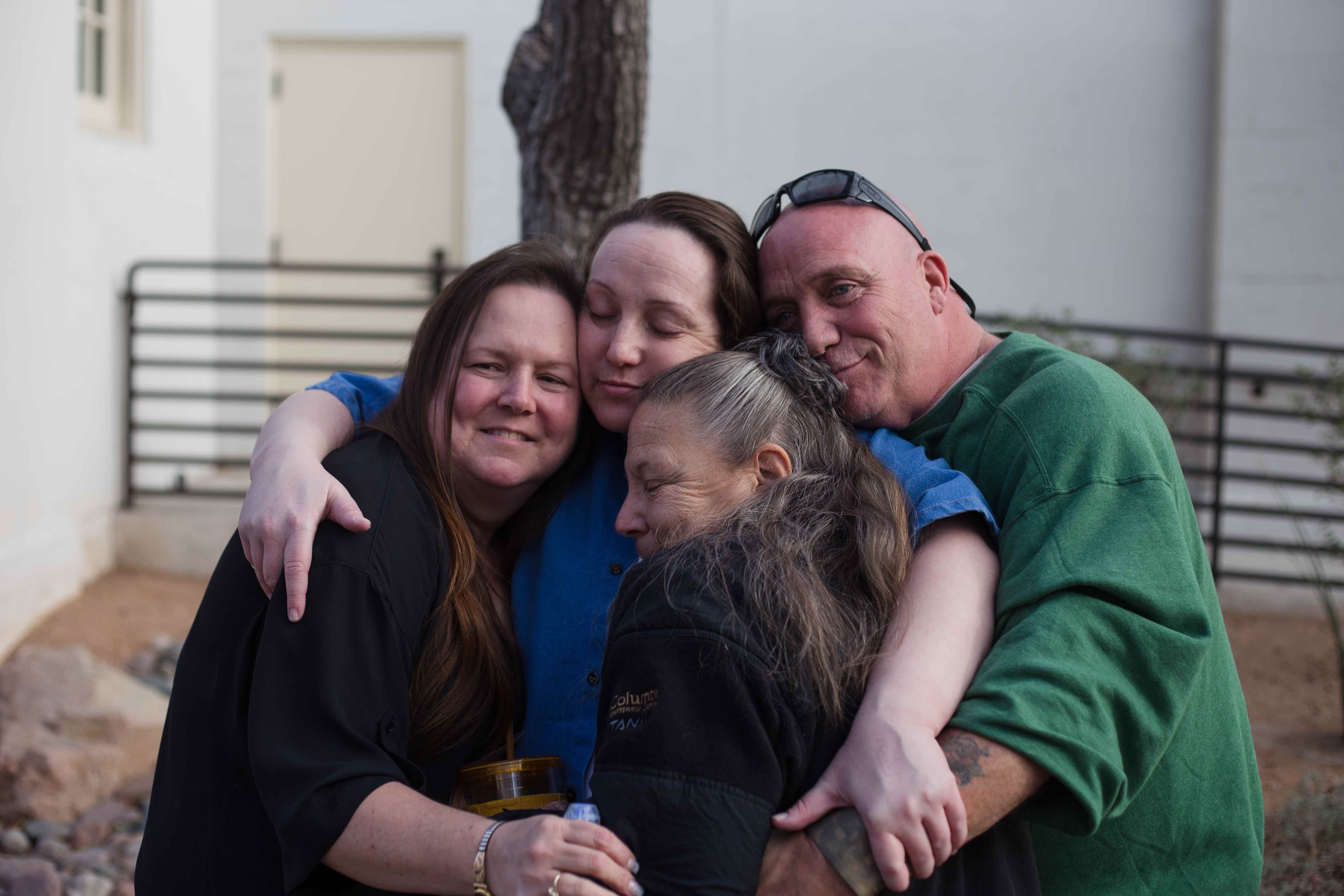 (Las Vegas— January 3, 2018) Today, Kirstin Blaise Lobato was released from prison after wrongly serving nearly 16 years for a murder she didn’t commit.  Late last week, the County District Attorney’s Office moved to dismiss all charges against Lobato for the 2001 murder of Duran Bailey in response to an earlier court decision vacating her conviction. On December 19, 2017, Clark County District Court Judge Stefany Miley had reversed Lobato’s murder conviction based on ineffective legal representation for failing to call pathology and entomology experts regarding the victim’s time of death, which would have supported her strong alibi.

“We are very pleased that this long struggle is finally over for Ms. Lobato and that she will finally be reunited with her family and friends,” said Vanessa Potkin, Post-Conviction Litigation Director for the Innocence Project, which is affiliated with Cardozo School of Law. “Despite the strong evidence that Ms. Lobato played no role in this crime, including alibi evidence that she was three hours away from Las Vegas on the day the victim was killed, the police focused exclusively and inexplicably on her as a suspect, and as a result, Ms. Lobato has spent all of her young adulthood wrongfully incarcerated for a crime she did not commit.”

Lobato was just 18 years old when she was charged with the brutal 2001 murder of Duran Bailey, a homeless man in Las Vegas. Lobato, who was tried twice for the crime, has always maintained her innocence. Bailey’s body had been found at around 10 p.m. on July 8, 2001 next to a dumpster in the parking lot of a bank building. He had been brutalized: his eyes were swollen shut; his skull cracked; several of his teeth had been knocked out of his mouth; his carotid artery was cut; and his penis had been removed.

“We are very pleased that this long struggle is finally over for Ms. Lobato and that she will finally be reunited with her family and friends.”  Vanessa Potkin

Lobato grew up in Panaca, Nevada, a small town three hours north of Las Vegas.  In late May 2001, two months before Bailey was killed, Lobato was visiting friends in Las Vegas when she was attacked in a motel parking lot by a man who attempted to rape her.  Carrying a small knife given to her by her father for her protection, Lobato slashed at the man’s groin area and escaped his grasp.  When she drove off, she saw the man on the ground, mobile and apparently crying.  In the coming days and weeks, Lobato described this attack to numerous people, making clear that it occurred before July 2001 and stating that she believed she may have cut the man in the groin area before running off to safety.

On July 20, 2001, nearly two weeks after Bailey’s murder, Las Vegas Metro Police Department detectives received a phone call from a Panaca resident who had heard from another Panaca resident that Lobato had told her that she had cut off a man’s penis in Las Vegas.  Based on that attenuated story alone, detectives immediately drove the three hours to Panaca from Las Vegas.  Upon arriving at Lobato’s family home, the detectives told Lobato that they knew she had recently been attacked.  The police recorded a statement in which Lobato described the attempted rape in late May, stating that it had happened “at least a month ago,” clearly describing a motel parking lot as the location and not a dumpster, and describing a man who was mobile and alive when she left and not beaten to death, as was Bailey.  Under the mistaken belief that police were informing her that the man who tried to rape her had died, she expressed remorse, and made other comments that the detective took as a confession for Bailey’s murder, even though the event Lobato described was glaringly at odds with the basic facts of his killing.

Armed only with this statement, the detectives arrested Lobato for Bailey’s murder. The police did not investigate clear alternate perpetrators with the motive and means to so violently kill Bailey.  On July 1, 2001, one week before he was found dead, Bailey assaulted and raped a woman who lived in an apartment building next to the bank where his body would be found.  Bailey threatened to kill the woman if she told anyone, but she eventually reported the attack to the police on July 5, 2001, just three days before Bailey was killed.  She also told a number of her male neighbors who had an ongoing dispute with Bailey about the attack.  Despite the woman’s prior contact with the victim, as well as her male friends’ motive to retaliate against Bailey, the police prematurely dismissed these potential suspects.

Instead, the police focused solely on Lobato, a teenager with no connection to Bailey and no motive to harm him.  At trial, the prosecution relied primarily on Lobato’s statement to the detectives, which they characterized as a confession, as there was no physical or forensic evidence linking Lobato to this crime.  The defense presented numerous family members and neighbors who testified that Lobato was actually in Panaca on July 8, 2001. The prosecution even conceded in summation that Lobato was in Panaca as of 11:30 a.m. on July 8th. However, the prosecution relied heavily on their medical examiner’s time of death estimation to undermine Lobato’s alibi defense: the medical examiner estimated that Bailey died up to 24 hours before he was pronounced dead at 3:50 a.m. on July 9th, meaning at approximately 4 a.m. on July 8th. The State argued that this put Bailey’s death at a time when Lobato was not accounted for by her alibi witnesses, and the jury convicted her.

At the October 2017 hearing, Lobato presented the testimony of three forensic entomologists, or insect scientists, all of whom concluded that based on the weather conditions in Las Vegas on July 8, 2001 and based on the outdoor location where Bailey’s body was found, one would expect to see his body teeming with blowfly eggs within a short period of time after his death.  Blowflies arrive very shortly after death and lay hundreds of easily observable eggs in a freshly dead body’s orifices and wounds.  Given that Bailey’s body had no blowfly eggs on it, each of the forensic entomologists independently concluded that he had to have died close in time to when his body was discovered around 10 p.m. on July 8th, during which time, as conceded even by the prosecution, Lobato was three hours away with her family in Panaca.  A forensic pathologist also independently concluded that based on the recorded rigor mortis changes in Bailey’s body between the time when his body was discovered and when his autopsy was conducted, he likely died during the early evening hours of July 8th.  Based on this compelling scientific evidence which could have been presented at Lobato’s trial and which would have likely changed the jury’s outcome, Judge Miley granted Lobato’s habeas corpus petition and vacated her convictions.

“We are grateful that the court recognized that Ms. Lobato’s defense counsel was ineffective for failing to present scientific evidence showing that the victim died close in time to when his body was found, at a time when Ms. Lobato was hours away from the crime scene,” said Adnan Sultan, Staff Attorney at the Innocence Project.

Jane Pucher, Staff Attorney at the Innocence Project, added, “We’re hopeful that this case will serve as a powerful reminder to leaders throughout the state that wrongful convictions present important opportunities to learn where the system failed so that these tragedies can be prevented from happening to others.”

Recognizing that Lobato will have many immediate needs after being wrongly incarcerated for so many years, her family has set up a Go Fund Me page for those wishing to support her.  Donations can be made at www.gofundme.com/kirstin-lobato-liberty-fund.

Lobato was represented by Barry Scheck, Vanessa Potkin, Adnan Sultan, and Jane Pucher of the Innocence Project as well as by local counsel David Chesnoff and Robert Demarco of Chesnoff & Schonfeld.