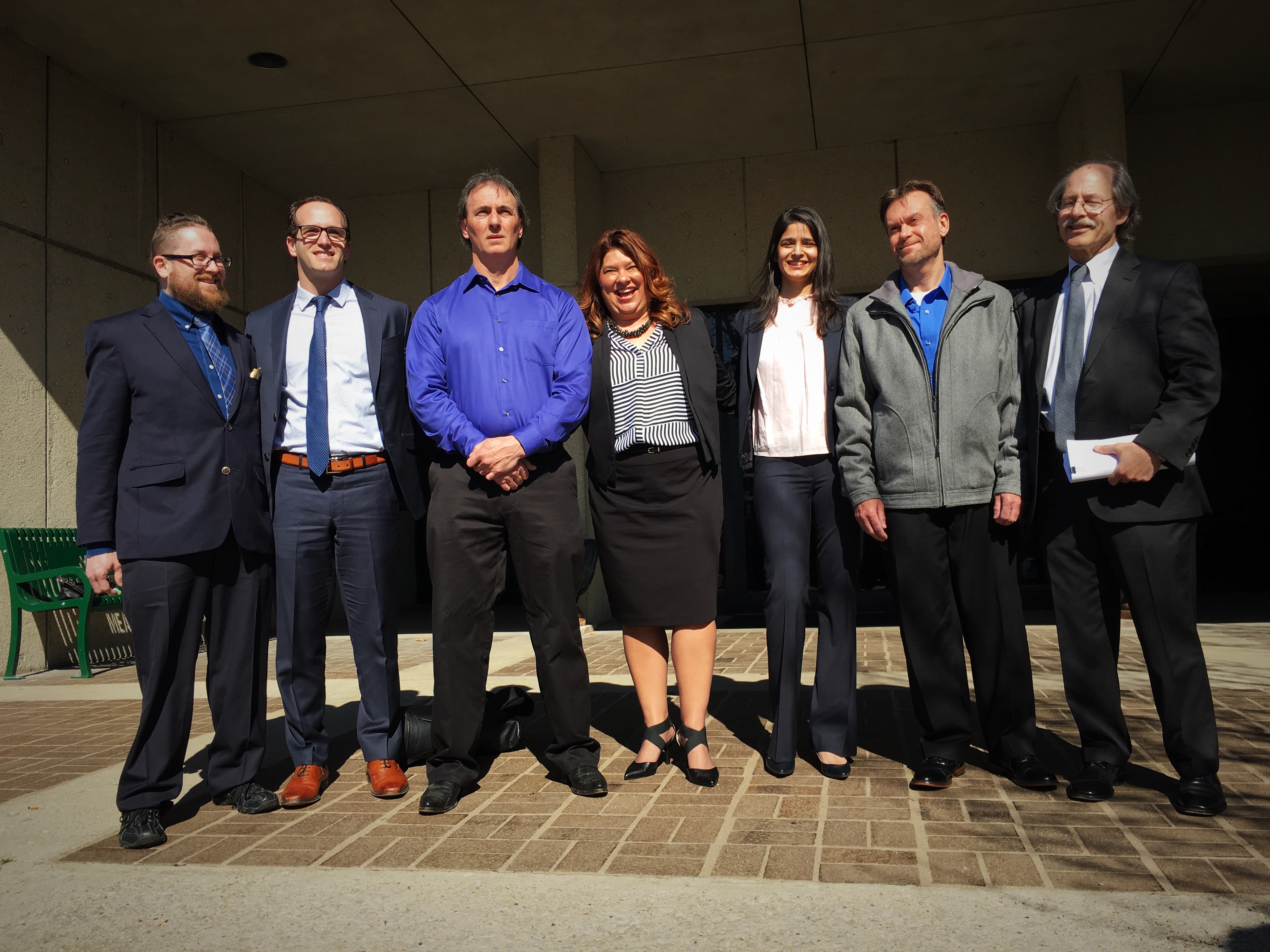 (February 26, 2018 – Louisville, KY) On the motion of the Kentucky Attorney General, today a Kentucky judge dismissed the 1992 murder indictments of Garr Keith Hardin and Jeffrey Dewayne Clark based on DNA testing and evidence of police misconduct proving their innocence.  The two men served more than 20 years before their convictions were vacated and they were released in 2016.

“The struggle for justice has been long and painful for Mr. Hardin and Mr. Clark who served more than 20 years and whom the Commonwealth twice threatened with the death penalty for a crime they did not commit,” said Seema Saifee, a staff attorney with the Innocence Project, which is representing Hardin.  “We are grateful to Assistant Attorney General Jon Heck for his willingness to review this case with an open mind and for moving to dismiss these indictments that cannot be defended. We are also especially grateful for the tremendous courage of Judge Bruce Butler who has given these men the opportunity to rebuild their lives and become the productive members of society they have been denied so long.”

Amy Robinson Staples of the Exoneration Project, which represents Clark alongside the Kentucky Innocence Project, added, “We hope the pain and suffering that these two men endured will inspire widespread criminal justice reform in Kentucky.  The injustice that occurred in this case is partially attributed to the false and manufactured statement by a jailhouse informant who was incentivized by law-enforcement officials. Despite efforts over multiple years to address the primary causes of wrongful conviction, including eyewitness misidentification, false confessions and unregulated informant testimony, Kentucky has not taken definitive action to ensure uniform adoption of reforms that would prevent future miscarriages of justice. Kentucky has had at least 12 wrongful convictions in the past three decades, yet has taken no meaningful steps to prevent other innocent people from suffering the same fate as Mr. Hardin and Mr. Clark.”

“The struggle for justice has been long and painful for Mr. Hardin and Mr. Clark who served more than 20 years and whom the Commonwealth twice threatened with the death penalty for a crime they did not commit.” Saifee

Keith Hardin and Jeffrey Clark were convicted in 1995 of fatally stabbing 19-year-old Rhonda Sue Warford and dumping her body in a field. At trial, the prosecution’s main “evidence” was its claim that Hardin and Clark committed the 1992 murder as part of a Satanic sacrifice – this was despite the fact that the state’s own expert acknowledged that nothing about the crime was consistent with a Satanic ritual sacrifice.

A microscopic hair expert claimed that a hair found on the sweatpants worn by the victim at the time of her death “matched” to Hardin. This was the only physical evidence linking the men to the crime or crime scene. In fact, hairs recovered from the victim’s hand did not match either Hardin or Clark. 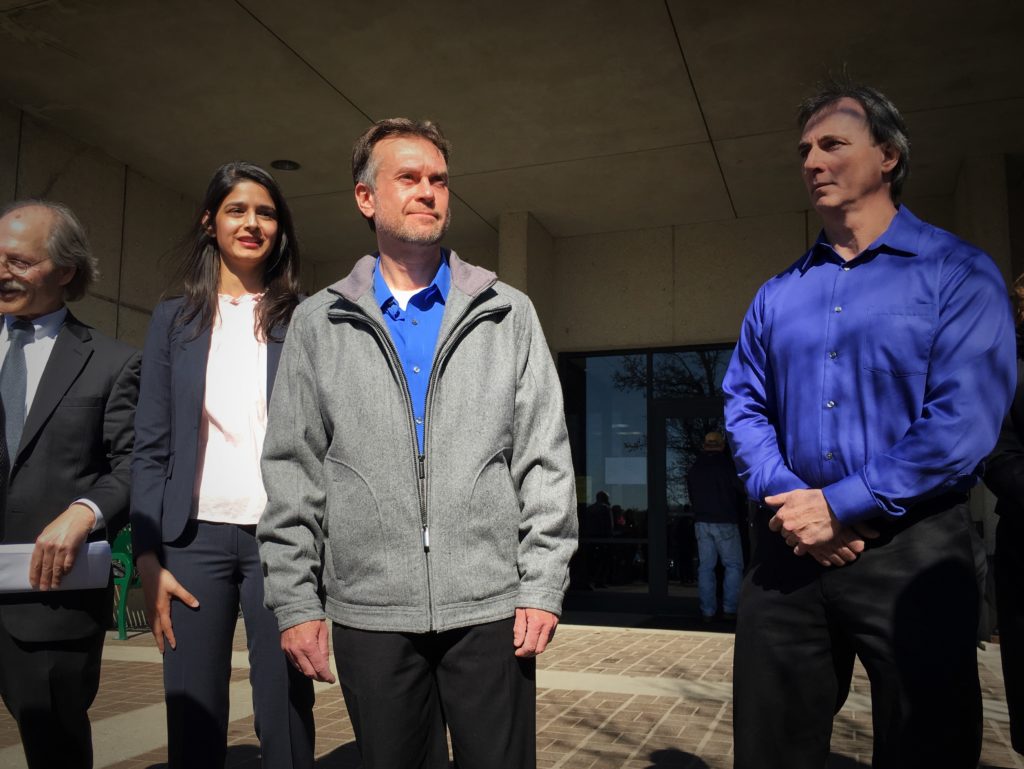 The state also claimed a bloody cloth and broken glass recovered from Hardin’s home supported its theory that the crime was motivated by Satanic sacrifice. The prosecution claimed that the blood on the cloth was deposited during a ritual animal sacrifice and the glass was a “chalice” from which Hardin drank the blood of the animals he sacrificed for Satan. At trial, Hardin testified that the blood on the cloth was his own blood, caused by cutting himself on the glass. The amount of blood was insufficient for DNA testing at the time of trial.

To connect the blood-stained cloth to the state’s theory, prosecutors relied on the sworn testimony of Detective Mark Handy. Handy testified that Hardin told him that he killed animals as a form of Satanic ritual and “got tired of looking at animals and began to want to do human sacrifices.” Hardin denied ever killing animals or ever making these statements. The two men were convicted and sentenced to life in prison.

In moving to dismiss the indictments on February 8, 2018 the Attorney General acknowledged that Det. Handy’s claim that Hardin stated that he wanted to commit human sacrifices is no longer credible. The motion noted that Handy was investigated for falsifying the confession of Edwin Chandler, who served 10 years in prison for a murder he did not commit, and concluded, “Put bluntly, the Commonwealth cannot put credibility into an unrecorded statement taken by a detective who has a documented history of fabricating details of a murder case in his investigative summaries.” 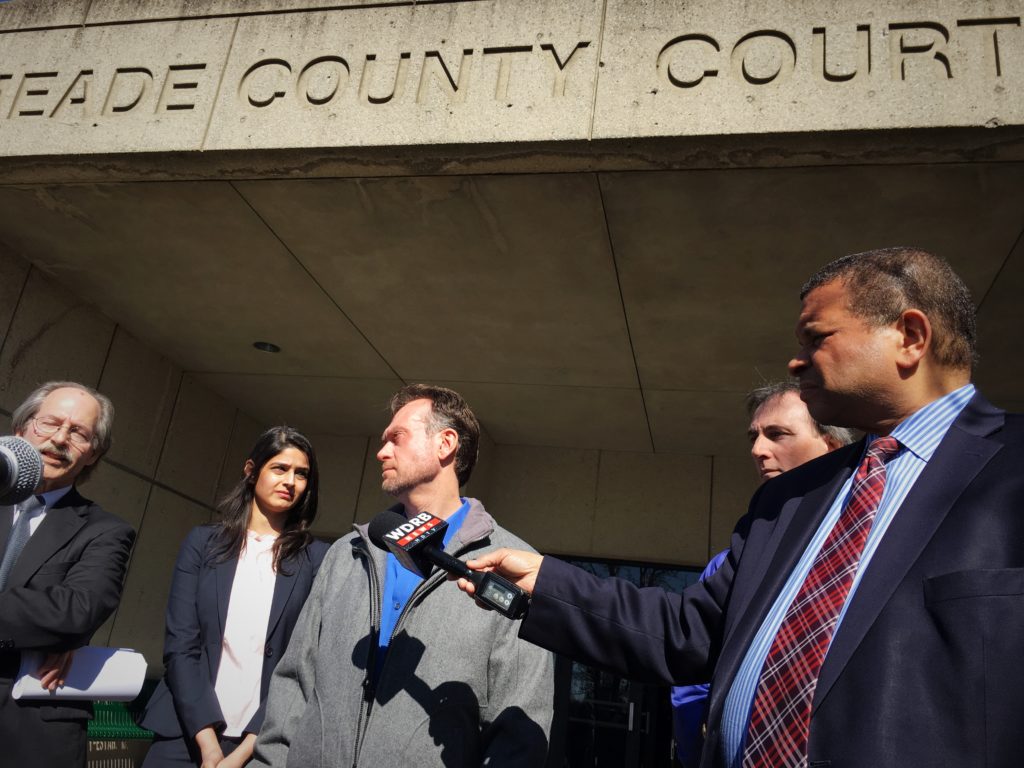 The Innocence Project and the Kentucky Innocence Project moved for DNA testing in 2009. The trial court denied the request. After years of appeals, in 2013, the Kentucky Supreme Court granted testing and ruled that it was “mystified, if not amazed, that the Commonwealth has such little interest” in the possibility that DNA testing might yield exculpatory results.  DNA testing was conducted on the hair on the victim’s sweatpants that the state’s analyst previously claimed “matched” to Hardin. The hair conclusively did not come from Hardin or Clark, disproving a significant part of the state’s case against the men. DNA testing was also performed on the blood on the cloth that the prosecution claimed was deposited during a Satanic animal sacrifice. The testing revealed that the blood was in fact Hardin’s own blood, as he truthfully testified at trial.

Based on the DNA evidence, and the new evidence that Det. Handy was recommended for a criminal investigation for his misconduct in another wrongful conviction case, Meade County Circuit Court Judge Bruce Butler vacated Hardin’s and Clark’s convictions in July 2016 and later released them on bail. The prosecution appealed the court’s decision to the Supreme Court of Kentucky, which affirmed the Circuit Court’s decision to vacate the convictions.

Shortly after the men were granted a new trial, the Commonwealth indicted the men on new charges of kidnapping, which the state believed would have enabled the prosecution to seek the death penalty, as well as perjury, because the men, after wrongly serving years in prison for the crime, made incriminating statements to the parole board in the hope of being released.  The Circuit Court later found these new charges to be a result of prosecutorial vindictiveness.

“We hope the pain and suffering that these two men endured will inspire widespread criminal justice reform in Kentucky.” Staples

Before those new charges were dismissed with prejudice by the Circuit Court last month, the Attorney General’s office agreed to reinvestigate the case, resulting in the February 8th motion asking that the murder indictments be dismissed.  Hardin and Clark were surrounded by family and other exonerees when that motion was granted today.

Linda Smith, former supervising attorney of the Kentucky Innocence Project said, “This case raises serious questions of government misconduct.  Attorney General Andy Beshear has called for a review of other cases handled by Det. Handy, which is a good first step in bringing accountability for the injustice that these men endured.”