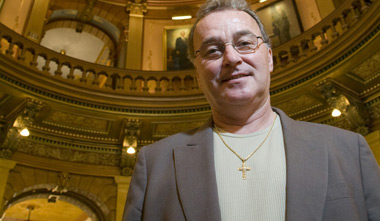 Ken Wyneimko has been an outspoken advocate for criminal justice reform since his DNA exoneration on June 17, 2003. By November, after only a few months of life outside prison, he created the Ken Wyniemko Foundation, a non-profit that seeks to help people who have been exonerated after serving time for a wrongful conviction. Last year, when two Michigan prisoners (Nathaniel Hatchett and Walter Swift) were freed, Wyniemko attended their exonerations and has helped support them in their first year out.

Wyniemko is also working with the Michigan Legislature to pass a compensation bill that would provide $40,000 per year of wrongful incarceration, lost wages, ten years of paid healthcare and reimbursement for attorney’s fees. Twenty-two states, including Michigan, have no law on the books to compensate the exonerated. The bill was

introduced in 2008, but never went to a vote in the state Senate. Wyniemko had spent many hours lobbying senators: “To say I was disappointed was an understatement.”

The bill has been reintroduced this year, and Wyniemko plans to testify again. “It’s something that exonerees need to have,” he says. “A lot of exonerees need help adjusting to their freedom. I don’t want another person to go through what I went through.”

But Wyniemko did contribute to one major legislative victory this year. He helped pass legislation extending Michigan’s law granting post-conviction access to DNA testing. If the state Legislature hadn’t acted, the law allowing DNA testing would have expired earlier this year. The Innocence Project and the local Cooley Innocence Project worked extensively to build support for the legislation – and Wyniemko’s personal advocacy swayed policymakers. “We put significant resources into educating lawmakers, equipping local advocates and supporting exonerees,” says Innocence Project Policy Director Stephen Saloom. “Ultimately, exonerees often have the biggest impact because legislators hear their deeply personal experience about why these laws matter so much.”