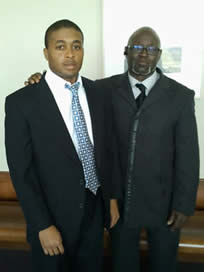 After Illinois’ recent surge in overturned convictions, some legal experts look toward Kane County as a model for handling new evidence in wrongful conviction cases, reported the

In the Jonathan Moore case, State’s Attorney Joe McMahan acted quickly to overturn the conviction once evidence of Moore’s innocence surfaced. Police considered Moore a suspect in an alleged gang-related murder after he placed himself at the scene and fit the description of the shooter. He was convicted in 2002 and sentenced to 75 years behind bars. But when a new witness came forward last year to clear Moore, Aurora police reopened the investigation and found additional evidence that Moore was not the gunman. The reinvestigation culminated in Moore’s release earlier this month.


Their approach stands in sharp contrast to a few high-profile cases in Lake County, where adversarial court battles broke out instead of what advocates say should have been objective reassessments of fresh facts.

Hanlon said he is starting to see the kind of process used in Kane in other cases in which he has been involved.

“There have been days when I’ve come home cynical and angry with the system,” he said. “I’m a hell of a lot less cynical than I was a year ago.”

Read background on the recent