By Carlita Salazar and Emma Zack 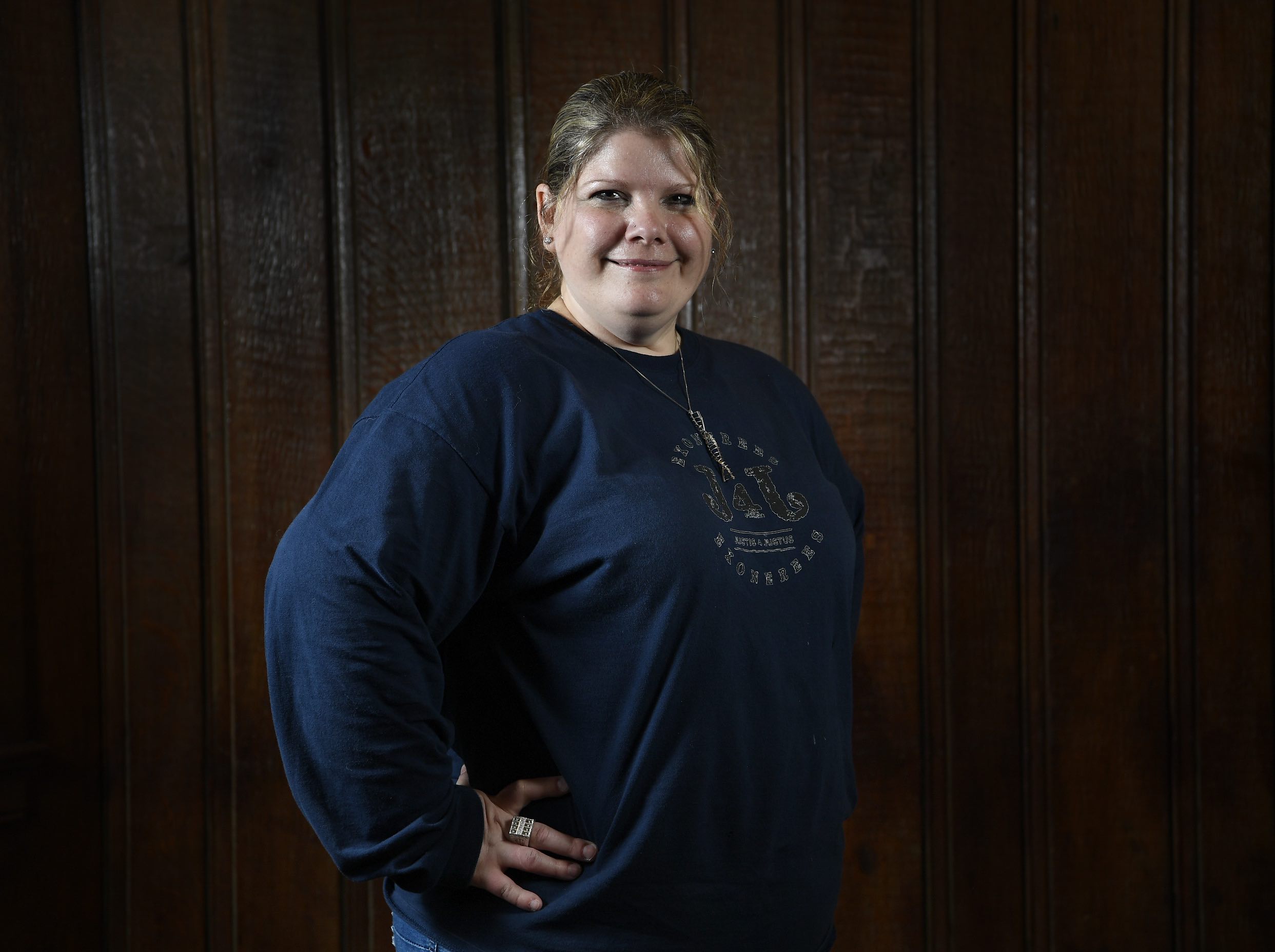 Kristine Bunch at the 2018 Innocence Network Conference in Memphis. Photo by Lacy Atkins.

In 1996, Kristine Bunch was wrongfully convicted of starting a fire that killed her three-year-old son, Anthony, in a trailer home they shared in Decatur County, Indiana. At the time of her conviction, Bunch was 22 and pregnant with her second child. While she was in prison, she met Donna Waters, who was sent to prison when she was just 14 years old. The two developed a deep friendship that flourished and continued, even after Waters was released.

Related: Bearing The Burden Of Love

In 2012, eight days before Christmas, Bunch was exonerated and, last July, in honor of her life and their friendship, Waters published the book, Speak the Truth: Justice for Miss America: The True Story of Kristine Bunch vs. State of Indiana, about Bunch. In honor of Women’s History Month, the Innocence Blog interviewed Waters and Bunch about their unbreakable bond and how it helped both of them survive life inside prison and its evolution since they were freed.

Innocence Blog (IB): What inspired you to write about Kristine’s case and her journey to freedom?

Donna: I thought this book would be perfect to be able to show her how I saw our lives for the last 21 years. Before this, I never wanted to be a true writer. I never wanted to tell stories because I knew that they would be hard to do. But, I had the idea to write about Kristine. She and I talked a lot about it, and I decided to do it.

IB: In the book, you discuss your relationship at length. What was at the heart of your friendship and have you maintained it over the past two decades?

Kristine: For me, Donna took the place of the baby that I gave birth to. There she was—a child, right in front of me, that I could love, protect, and nurture. I really needed to fill that void, because it’s devastating giving birth in prison and then watching your child leave.

For me, I took everything I felt about being in prison—unloved, unwanted—and I made sure that in whatever creative way I could that I let Donna know she was very loved and very wanted and very appreciated.

Donna: It took me many many years to understand why Kristine loved me so much. But by the time I got released, I knew how much she loved me and I couldn’t imagine my life without her. If that meant that I had to write her, come to her, that was everything I could do to make sure that we maintained our friendship. I needed her.

I came into this world [released from prison] with nothing. She walked me through it. She said, “Ok, babe. This is your second chance. What are you going to do with it?” So, for me, it was always a connection that I couldn’t afford to lose.

IB: Krissy, can you talk about what the title, being Miss America, means to you?

Kristine: My first thoughts of Miss America are: she’s tall, beautiful, wears a crown, gets a bouquet of roses and says she’s going to go out and change things in her year of reign. So, when Donna first called me Miss America, I didn’t get it. But, looking back now, I understand.

Anytime Donna was crying or upset, I would tell her, “You need to hold that head high. Shoulders up and back. Stand tall and smile your way through it. And don’t let them know that they can hurt you—that they can tear you down.” For her, that took on the meaning and title of Miss America. And, I lived that through prison. I tried not to let people know they got to me. I tried not to show how heartbroken I was. I pushed through. That’s something that you have to do in prison. You have to act like you can’t be hurt.

IB: Did you rely on one another to be those strong Miss America types?

Kristine: Yes, and it made us both better. For me, it was easier. Think of a mom or a mother bear protecting her cub—that was me. A lot of times, Donna’s little 15-year-old mouth would get her into trouble, and I would come in and shelter her from that and let people know she wasn’t on her own. It was something we had to do in that environment.

Donna: I couldn’t have imagined ever having been Miss America like her. Remember, I went to prison when I was 14. My concept of the world was so limited in terms of what I’d been exposed to. But, I remember watching the pageant. I remember watching those women walk with such grace, even though their shoes were cutting their heals so bad they were bleeding. And that’s how I looked at Kristine.

She was always so composed, even though everything was always cutting into her. I made up my mind a long time ago, “When I grow up, I’m going to be just like her.” She took a situation where I really could have been a product of the system and changed me into what I am today: I’m a mother. I’m a wife. I have a successful life.

Without Kristine, I probably would have already been back in the system. I didn’t know how to determine what was good for me and what wasn’t. Kristine let me make all of the mistakes I needed to make in prison. But she also made sure to ask me when I messed up, “Why did you mess up?” I don’t think I would have known that kind of love had it not been for Kristine, and I wouldn’t have had it to pass down to my own daughters. For, me, there’s only one Miss America.

IB: What are some of your hopes for Krissy now that she’s rebuilding her life?

Donna: My hopes are probably different than hers. I hope that one day she’ll be able to buy a beach house and not have to deal with any stress! But I also want her to be happy. She needs to give back in a way. She has a wonderful organization for which she’ll have a wonderful platform. I just want her to succeed and do everything that she wants to do. At the end of the day, the world deserves to know Krissy.

Krissy has – over and over, time and time again – given a piece of herself that maybe she didn’t have to give. We have talks where she says she’s so frustrated, and I tell her, “Well, you’re still getting up every morning and fighting.” Everytime she tells me about a new project, I tell her how excited I am. Even though it’s hard out here, I want her to continue to find happiness.

IB: Krissy, can you tell me about the organization you co-founded?

Kristine: It’s called JustIS 4 JustUS. The reasoning behind the name is that when an exoneree is released, the situation “just is.” There’s no way to go back and give them that time—there’s nothing. Their circumstance is what they walk out to, but it takes all of us to change it. We’re essentially trying to build a community in each place [where people are released]. I’m in Indiana, and [co-founder] Juan is working in Illinois. We’re bouncing back and forth so that when someone is released, they’ll have support from the lawyers and organizations that get them out.

But, for another exoneree to be there and say, “I know. I went through the exact same thing,” is important. This is also why we have volunteers within the community who take exonerees shopping for the first time or give them a place to stay if they don’t have one. People are sometimes released with virtually nothing, and not every state has compensation, so they’re on their own.

IB: How can people contribute to JustIS 4 JustUS?

Kristine: We do have a website where you can donate. For some of my old school people, our address is on the website if you would like to send a check. We have thank you letters and our tax ID for everyone who donates. We also have a “Contact Us” page so if someone doesn’t have money to give, but they have a beauty shop and they’re willing to give somebody a haircut and a color, or if a dentist says they’re willing to give a free exam. We’re trying to build a database of volunteers who are willing to give their time or services to exonerees. In these circumstances, whatever you have is beneficial.

IB: Do you think writing this book has changed or influenced your relationship?

Kristine: We’re closer. Donna was always my go-to person, especially after I got out, to just bounce things off of her to make sure that I wasn’t failing in real life; you never know if you’re making the right choices and it’s scary and intimidating. But now, I feel that I can call her and she already knows, just from my greeting, whether it’s a good day or a bad day, or if I’m emotional or if I need to talk or just to listen.

Donna: It made us closer, if that was even possible. Writing this book made me remember why she’s my hero.

IB: Krissy, what do you want for people to take away from reading the book?

Kristine: The biggest thing I want people to take from it is not only that our justice system is really screwed up, but so are the people running it. We don’t have a good checks and balance system to ensure that wrongful convictions aren’t taking place. That’s really the big picture scope.

I also want people to learn about the type of person Donna is. Knowing that I contributed to that, and knowing that she’s proud of who she is and loves herself despite every circumstance in her life, that’s one of my greatest accomplishments. I hope people realize, no matter what the circumstance is, that you can bring about good and you can bring about change. It doesn’t have to be the biggest, grandest gesture—it’s the smaller things you can spread out.

IB: Donna, what do you hope that people will take away from reading this book and learning about Krissy’s story?

Donna: That she shouldn’t have had to be that strong. That’s something I’ve never considered: what would life be like had this not happened to her? Where would she have been? She would’ve always done something powerful, because she has a powerful soul. But they took that away from her—they took away her right to find a way to make changes. She was so focused on trying to get to her son and trying to prove she didn’t do this.

I want my readers to demand that this doesn’t happen to another Kristine. Another mother shouldn’t have to learn how to grieve inside of prison. I want people to be inspired, but I also want them to say: this can’t happen again. It’s not right.