John Oliver Reminds Us Why We Should Care about Prosecutor Accountability 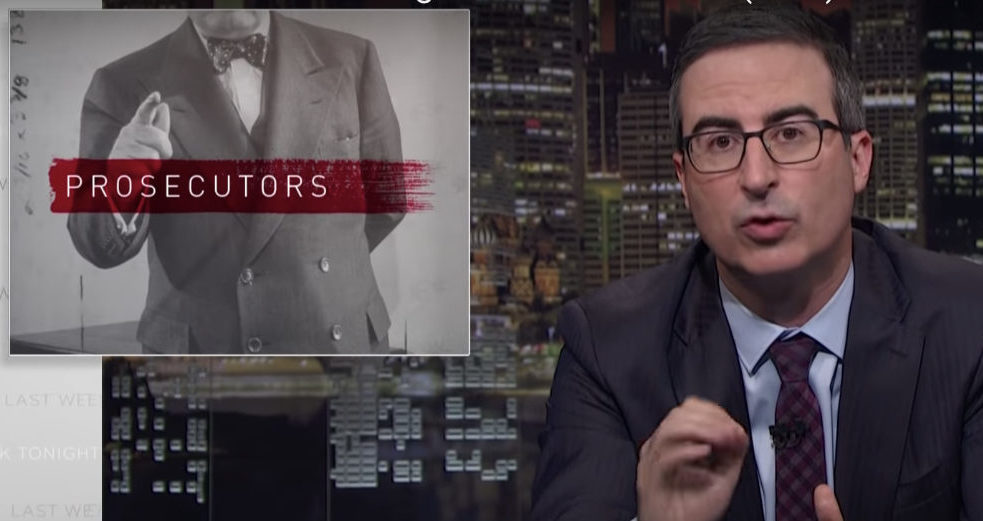 John Oliver discusses the power of the prosecutor on "Last Week Tonight."

On this week’s episode of Last Week Tonight, John Oliver discusses the vast power of the approximately 2,500 prosecutors who currently work in the United States criminal justice system. Oliver reminds viewers that in the majority of cases, a judge or jury do not decide a defendant’s fate; prosecutors do.

“Nearly 95% of the cases that prosecutors decide to prosecute end up with the defendant pleading guilty,” explains Oliver. “No ‘innocence until proven guilty’—just a prosecutor striking a deal behind closed doors.” This, in turn, allows a massive and highly dysfunctional system to continue prosecuting cases without closely examining the evidence, which inevitably leads to the wrongful conviction of innocent people.

Oliver presents an account from exoneree Rodney Roberts, who was wrongly convicted of a sexual assault that DNA evidence later proved he did not commit. Despite his innocence, Roberts pled guilty to the assault. Roberts says: “I thought that to get home to my son and my family—to salvage my life—the best thing I could do would be to plead guilty and to fight it when I got home.”

Oliver explains that in the five percent of cases in which a defendant does decide to go to trial, there are many ways in which prosecutors can influence the trial’s outcome, such as withholding evidence or manipulating jury selection—both of which can increase the probability of sending innocent people to prison for crimes they didn’t commit. As Oliver points out, the National Registry of Exonerations approximates that 25 percent of wrongful conviction cases actually involved prosecutors hiding exculpatory evidence.

After learning the disconcerting truths about the power of prosecutors, viewers are left with the question: how can prosecutors be held accountable for their actions?

Oliver urges viewers to learn about local district attorneys and their agendas and, ultimately, to vote because citizens must demand change through the polls—especially since, oftentimes, prosecutors run without opposition.

“The truth is, prosecutors have the ability to ruin lives in a second, so we need to find out who our D.A.’s are and get a sense of the policies and priorities that they are carrying out. If we do not decide ourselves what we want our criminal justice system to look like — prosecutors will decide.”

“Most people know as much about their local D.A. as they do about their local Cheesecake Factory manager.” Oliver says. “Chances are you don’t know who they are and if you do it’s probably because something truly terrible has happened.”

He concludes: “The truth is, prosecutors have the ability to ruin lives in a second, so we need to find out who our D.A.’s are and get a sense of the policies and priorities that they are carrying out. If we do not decide ourselves what we want our criminal justice system to look like — prosecutors will decide.”

Watch the full episode below.