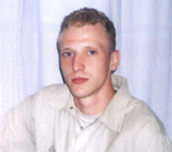 The Innocence Project recently filed a petition presenting new DNA evidence that clears Joseph Buffey, of Clarksburg, West Virginia. Buffey pled guilty of the rape and robbery of an elderly woman in 2001 after having falsely confessed to the crime. Recent DNA tests on crime scene evidence definitively exclude Buffey, yet local officials have denied requests to enter the DNA profile into a national database to see if it matches any known criminals.

One week after the rape and robbery, Buffey and two other men were arrested in connection to a string of robberies. After being questioned for nearly eight hours, Buffey confessed to the rape, then recanted minutes later. The Gazette-Mail reports:


Minutes after giving his confession, Buffey recanted it, the petition states. The officers went back into the interrogation room, and Matheny told Buffey that he was going to give him an opportunity “to sing.”

“You really want to know the truth?” Buffey asked, according to the petition.

“Yeah, we want the truth,” was the reply.

The petition also states that at trial, the lead detective presented at least four pieces of blatant false information as facts to the grand jury. The Innocence Project has requested a hearing to consider the petition and seeks to vacate Buffey’s conviction.