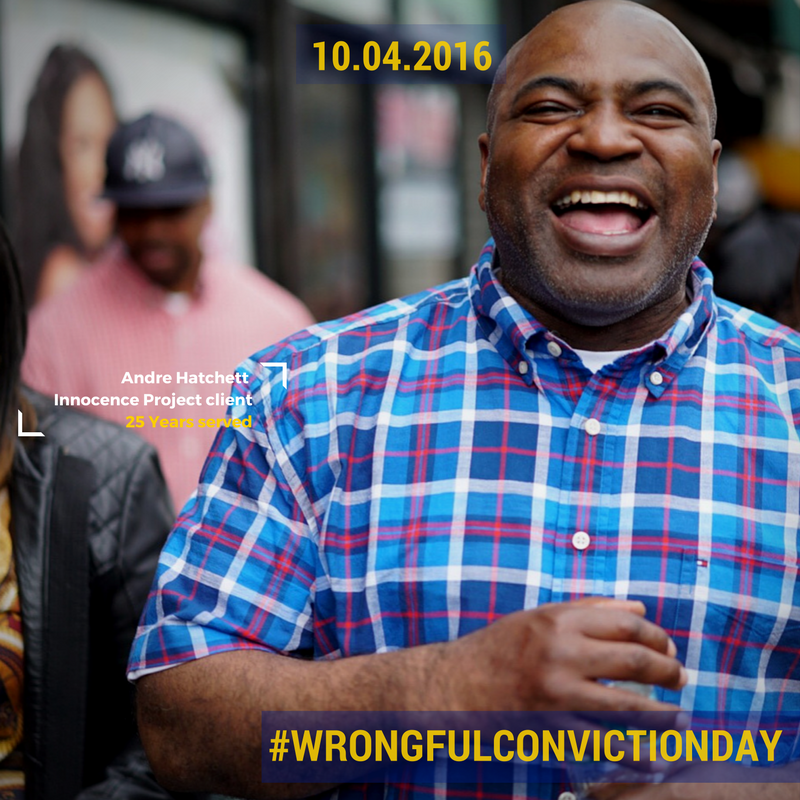 (New York, NY– October 4, 2016) – Amid a year replete with exoneration successes across the United States, the Innocence Project today will mark the 2016 edition of Wrongful Conviction Day – the annual international observance devoted to ending wrongful convictions and spotlighting the plight of those in prison for crimes they did not commit.

“Each year, this day gives us an opportunity to raise awareness about wrongful convictions and the fact that thousands, if not tens of thousands, of innocent people languish in our prisons fighting for justice,” said Maddy deLone, Executive Director of the Innocence Project. “On this International Wrongful Conviction Day, we encourage everyone to help us protect the innocent by calling for stronger laws and policies to prevent these tragedies from happening in the first place.”

Created by the Innocence Network in 2014, Wrongful Conviction Day is an international day that aims to raise awareness of the causes and remedies of wrongful conviction and to recognize the tremendous personal, social, and emotional costs of wrongful conviction for innocent people and their families. This year’s observance will draw particular attention to the growing need for improved compensation for all exonerees as they seek to readjust to their lives as free individuals in society.

As part of the nationwide celebrations in honor of the Day, the Innocence Project has arranged for the historic Clock Tower Building in Santa Monica, California, to be illuminated in yellow and white – the colors of wrongful conviction. Members of the public are encouraged to photograph the lighted Clock Tower Building and post their pictures to social media using the hashtags #WrongfulConvictionDay and #StandUp4INNOCENCE.  Buildings in a number of cities throughout the country and around the world will also be illuminated in yellow and white.

In addition, legendary folk singer Joan Baez kicks off her latest concert tour on Wrongful Conviction Day in Portland, Maine, and will be accompanied at venues on her 20-city tour by volunteers from Innocence Network organizations who will inform concertgoers about their work to exonerate people who have been wrongly convicted of crimes and efforts to reform the criminal justice system.

“I am pleased and grateful to collaborate with the Innocence Project and Innocence Network members,” Baez declared. “We hope to provide a platform which will amplify the heartbreaking stories of men and women wrongfully convicted, who suffer so needlessly. The fight against their unlawful convictions shines a light on both a broken criminal justice system and the racial inequality of people serving time. I hope my audiences will be motivated to support their work.”

“It’s an honor to contribute in the fight against wrongful conviction and I hope that the public heeds our call on this very important Day,” Mr. Phillippe explained. “It’s horrifying that in 2016 innocent men and women are being sent to prison for crimes they did not commit,” he continued. “This needs to stop and it needs to stop now.”