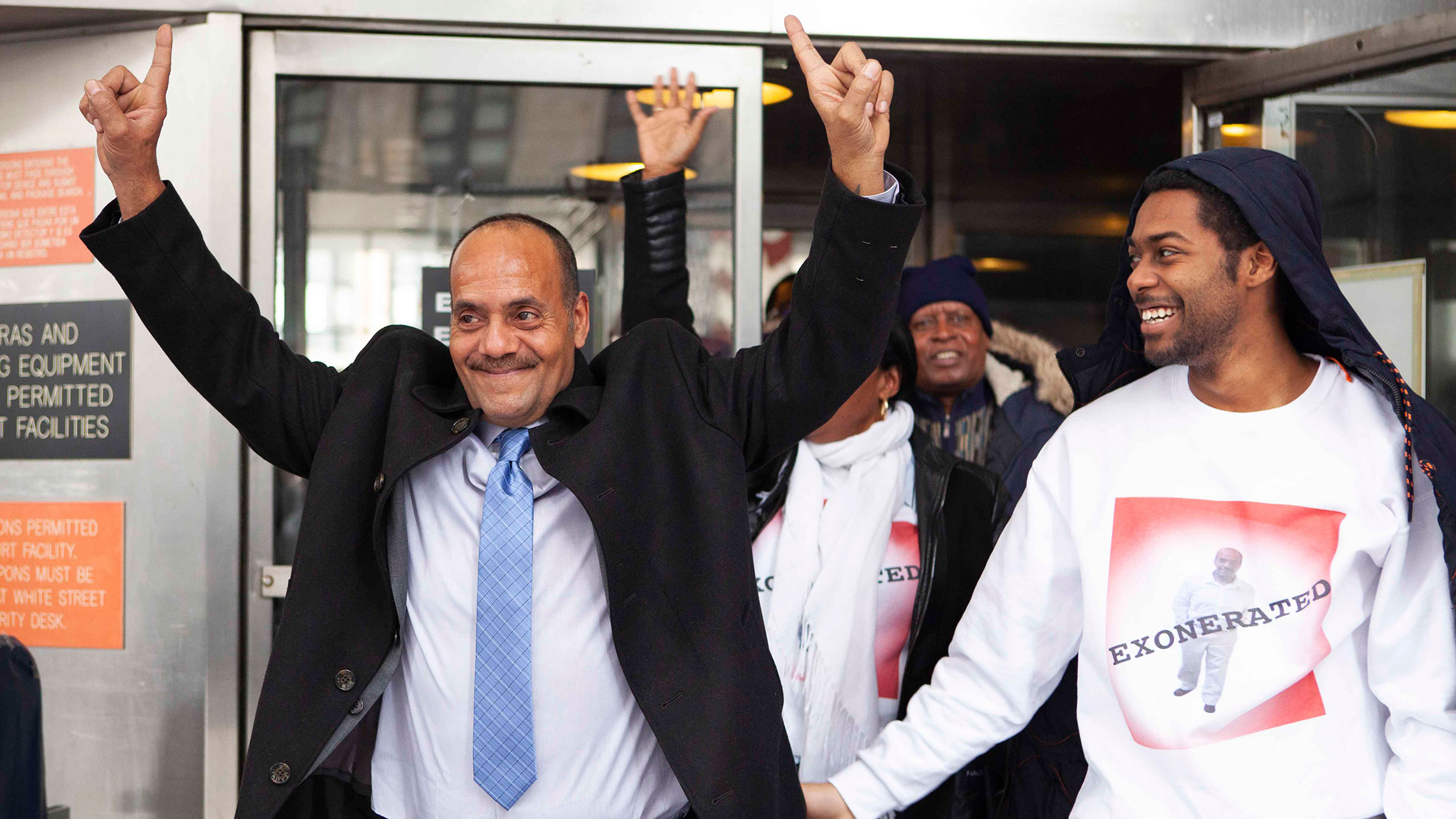 Rafael Ruiz and his family walk out of the New York State Supreme Court after his exoneration on Jan. 28, 2020. [Daniele Selby/Innocence Project]

Rafael Ruiz used to love breakdancing as a teen in New York City. He and his friends would often put on shows in the park, dancing to Grandmaster Flash’s “The Message” and other hits. That was before he was convicted, at age 25, of sexual assault in 1985 and served a quarter of a century in prison for a crime he did not commit.

But today, a New York State Supreme Court judge vacated Ruiz’s conviction and dismissed all charges against him. And though the 60-year-old said he’s not quite as quick on his feet as before, he “still has a few steps left” and might celebrate his exoneration with a dance.

“Sometimes when I feel really happy, I just do it. I don’t care about my knees or anything. I just do a little break dance,” Ruiz, an Innocence Project client of nearly 13 years, said. 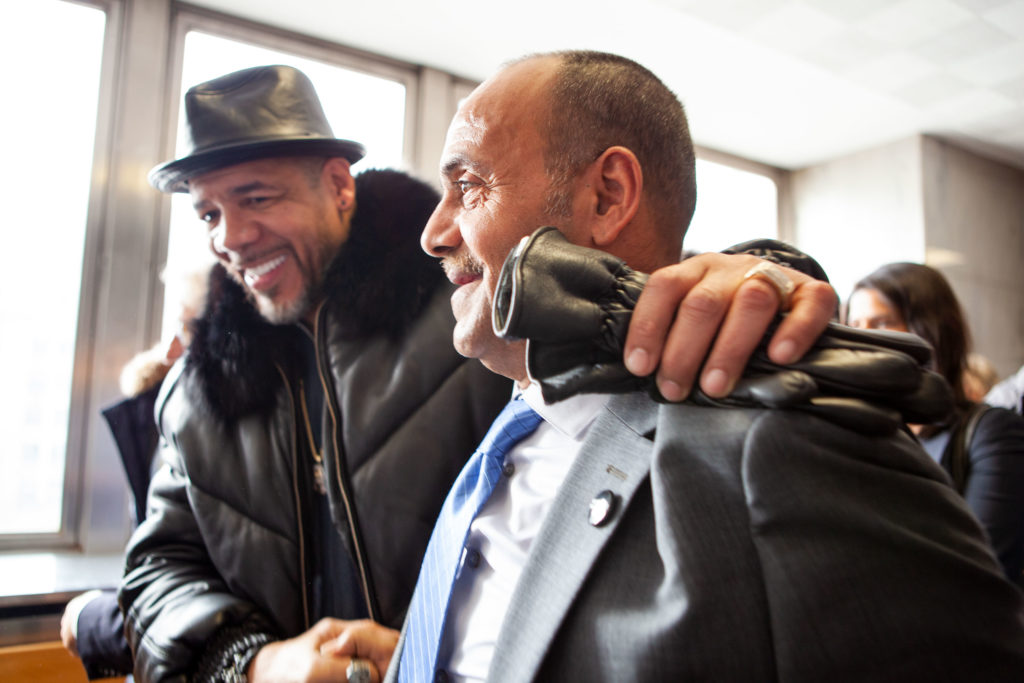 Ruiz was accused of a sexual assault that took place in East Harlem in 1984, and was initially offered a guilty plea deal carrying a prison sentence of one-and-a-half to three years. But Ruiz rejected the deal, maintaining his innocence, and ultimately decided to take his case to trial.

At trial, Ruiz was sentenced to 8 ⅓ to 25 years in prison, despite the fact that he did not match the description of the attacker, who the victim said was an acquaintance of hers. She knew this man as “Ronnie,” a name Ruiz has never been called.

Ruiz served the full sentence and was released on parole in 2009, having spent just as much of his life in prison as outside of it.

“I was a man who went to court and went to trial to prove his innocence, but I was treated like I was already guilty when I stepped in there,” Ruiz said.

His case highlights what is often called the “trial penalty” — when defendants receive much longer sentences for the same crime after taking their case to trial than they would have if they had pled guilty and taken a deal. This is one of the reasons why 18% of known exonerees pled guilty to crimes they didn’t commit.

Ruiz was exonerated today based on evidence that was newly discovered during a joint investigation by the Innocence Project and the New York County District Attorney’s Office’s Conviction Integrity Program. DNA testing of samples the victim’s sexual assault kit excluded Ruiz as the source of all the samples tested.

Two weeks after the assault took place, police detectives asked the victim to identify the apartment from which she thought her three attackers had come. The victim pointed out Ruiz’s brother’s apartment, and later that night police approached Ruiz and told him his name had come up in an investigation.

Rafael Ruiz spent 25 years in prison for a crime he didn’t commit. The @innocence project and the @ManhattanDA’s office spent more than a decade trying to clear his name. Today that finally happened. Ruiz was arrested when he was 24 years old. He is 60 now. @NY1 pic.twitter.com/Jou0P4c3xM

He agreed to go to the precinct and be photographed without understanding how his photo would be used. The police then presented Ruiz’s and five other photos to the victim. Though the victim did not describe her attacker as having an Afro hairstyle, the other five men whose photos police presented to the victim all had Afros. Ruiz’s hairstyle was the only one similar to the victim’s description of “Ronnie.”

During his incarceration, William M. Tendy, Jr., a former Assistant District Attorney in the Trial Bureau of the New York County District Attorney’s Office, began investigating Ruiz’s case in his spare time and ultimately discovered that a man named Ronnie, who fit the victim’s description of her attacker lived across the hall from Ruiz’s brother. And neighbors described Ronnie as having a history of violence against women.

Of the more than 367 wrongful convictions in the United States overturned by post-conviction DNA evidence, approximately 69% involved mistaken eyewitness identifications. 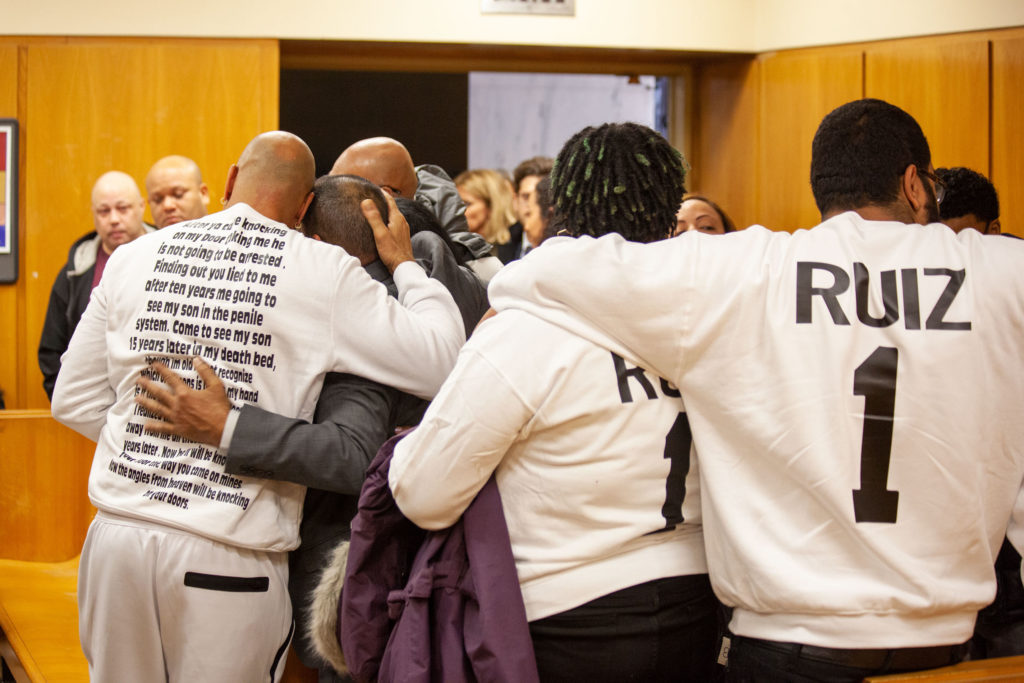 Rafael Ruiz and his brother hug immediately after his exoneration on Jan. 28, 2020. [Daniele Selby/Innocence Project]

Ruiz hopes that his case will help others in similar situations. He said that while in prison, paralegals and others incarcerated with him attempted to help him by looking for cases similar to his in the law library. They told him that if they could find a person who was exonerated and whose case had similar circumstances, he might be able to use that to help fight his own case — but they never found one.

Ruiz said he nearly gave up, until he received a letter from the Innocence Project stating they were taking on his case.

“I guess now I might be one of the cases or life stories in those law books that someone can use and hopefully it can help them out with their cases. That makes me feel good because I would like to see [innocent] people who got accused of doing a crime not go back into the system or lose their families or loved ones,” he said.

Ruiz credits his sister with helping him “keep his head straight” through the toughest of times, and now lives with his brother in the Bronx where they share their home with their beloved pets, including a talking parrot and a 5-foot-long snake. With the weight of his conviction lifted from his shoulders, Ruiz said he hopes he’ll be able to gain more opportunities and help his siblings the way they’ve helped him.

“I have my freedom and now I can go on with my life,” he said.

You can support Rafael Ruiz by purchasing items on his Amazon Wishlist here.