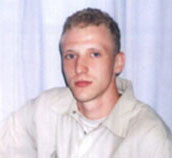 A three-day hearing begins today in West Virginia’s Harrison County Circuit Court where Innocence Project attorneys will continue the fight to overturn Joseph Buffey’s conviction of a 2001 rape and robbery that DNA testing proves he didn’t commit and pointed to another person with a record of committing similar crimes.

Buffey pleaded guilty to the rape and robbery of an 83-year-old woman based on the advice of his lawyer who told him he risked a longer prison sentence if he went to trial and was convicted. Buffey confessed after an eight-hour interrogation, giving facts that were inconsistent with the crime. According to his Innocence Project attorneys, he quickly regretted his plea.

DNA testing conducted in May 2011 excluded Buffey, and after months of resistance from the prosecution, the profile was finally run through the federal DNA database to see if it matched a convicted offender. In November, the DNA identified another man with multiple felony criminal convictions, including breaking into a residence and robbing and assaulting a woman. Although that man, Adam Bowers, has been charged with the crime, prosecutors continue to block efforts to free Buffey, reported the Associated Press.

The victim maintains that only one man committed the crimes, and she did not pick Buffey from a photo lineup even after his confession. The prosecution previously argued that Buffey could have been an accomplice.


“We believe the evidence of Joseph Buffey’s innocence is overwhelming,” said Nina Morrison, a staff attorney with the Innocence Project, which is representing Buffey. “The record has always shown that this crime was committed by one person and thanks to the DNA we now know who that person is. It’s Adam Bowers and not Joseph Buffey.

“We look forward to presenting our case.”

Judge Thomas Bedell could rule as early as this week or take more time reviewing the case.

additional coverage of the case