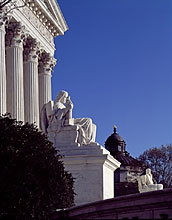 One week after the U.S. Supreme Court ruled that police may take DNA samples from people who have been arrested for serious crimes in

columnist Adam Liptak discussed the ruling with Innocence Project Co-Directors Barry Scheck and Peter Neufeld. Neufeld was struck by the irony in Kennedy’s decision given another ruling on DNA testing in 2009. Liptak writes:


In 2009, Justice Kennedy joined the majority opinion in a 5-to-4 decision that said prisoners had no constitutional right to DNA testing that might prove their innocence. Mr. Neufeld, who founded the Innocence Project with Barry Scheck, represented the prisoner on the losing end of that case,

But last week, Mr. Neufeld said, Justice Kennedy concluded that “it’s O.K. for the state to take DNA, without a warrant, from mere arrestees, who may ultimately have their charges dismissed.”

The combination of the two decisions baffled Mr. Neufeld. “That is quite a worldview,” he said of a jurisprudence that allows nonconsensual testing of people presumed innocent but denies voluntary testing to people who insist that they really are innocent.