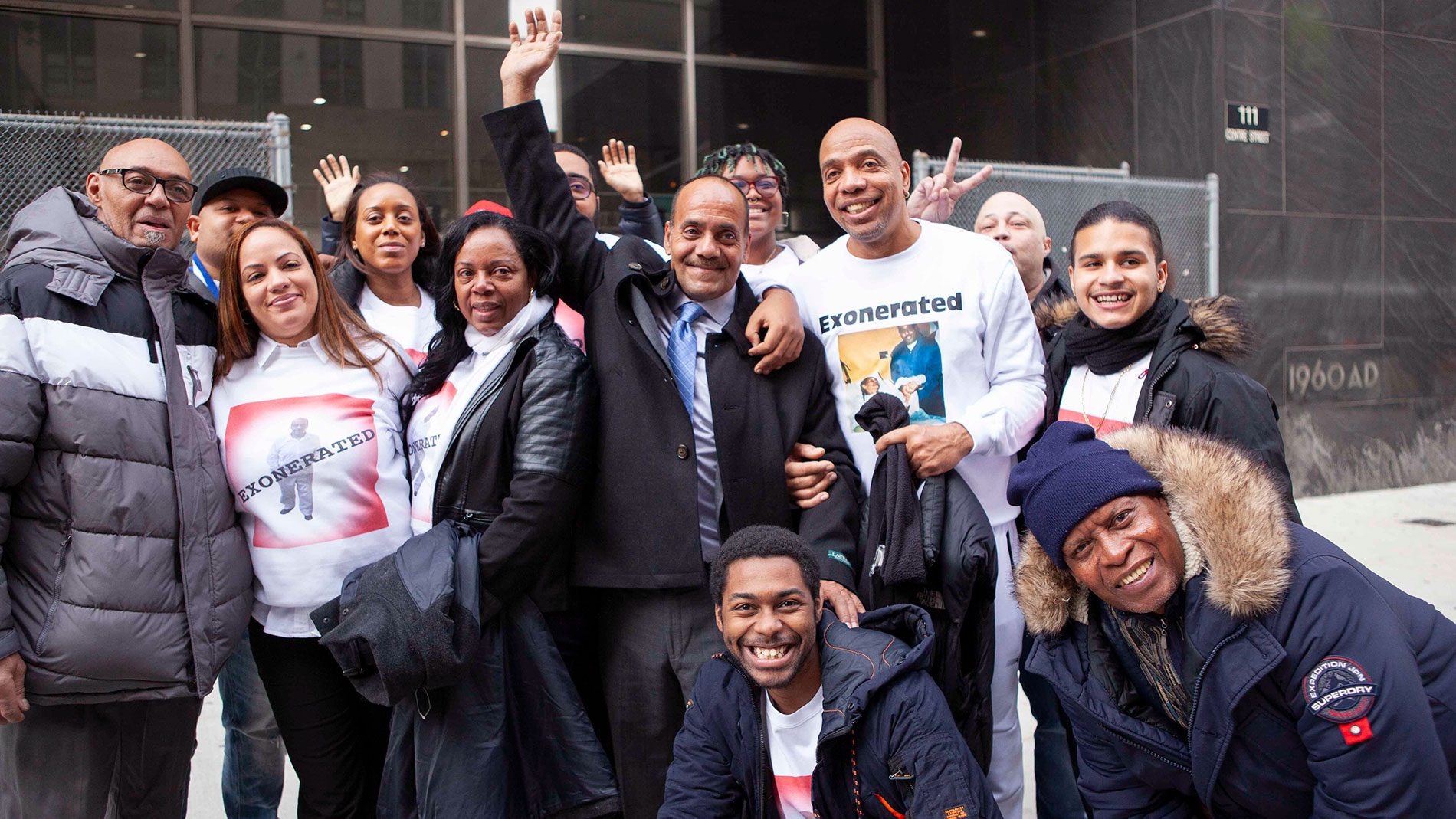 Rafael Ruiz and his family outside the New York County Court after his exoneration on Jan. 28, 2020. [Daniele Selby/Innocence Project]

(New York – January 28, 2020) Today, the Hon. Stephen Antignani of the Supreme Court of the State of New York granted a joint motion to vacate the 1985 conviction of Innocence Project client Rafael Ruiz and entered an order dismissing all charges against him. He was previously released after serving 25 years in prison for a crime he did not commit. Today’s exoneration was the result of newly discovered evidence found as part of a dual investigation by the Innocence Project and the New York County District Attorney’s Office’s Conviction Integrity Program that proves Ruiz’s innocence.

“This case is an example of how conviction integrity programs can work collaboratively with defense attorneys.”

“This case is an example of how conviction integrity programs can work collaboratively with defense attorneys,” said Seema Saifee, senior staff attorney with the Innocence Project. “It was through this collaboration that we were able to get to the truth in Mr. Ruiz’s case. We now know that police conducted an inadequate investigation marked by unduly suggestive identification procedures. This led to the conviction of a young man with limited resources who bravely insisted he was innocent.”

“I am thankful to the Innocence Project for all their work to make today a reality,” said Ruiz. “I lost 25 years of my life because I insisted upon my innocence and rejected plea bargains. Today feels like a huge burden off my shoulders and I look forward to living a good life moving forward.”

“A prosecutor’s job is not just to seek convictions, but to seek justice,” said Manhattan District Attorney Cyrus R. Vance, Jr. “Today, attorneys from my Office’s Conviction Integrity Program moved to vacate the 1985 conviction of Rafael Ruiz and to dismiss the indictment against him on the grounds of newly discovered DNA evidence. We were pleased to be joined in today’s motion by the Innocence Project and I’m grateful for their continued partnership. I’d also like to thank the prosecutors in our Conviction Integrity Program – the first on the East Coast – who work every day to review claims of innocence, and just as importantly, to improve prosecutorial practices on the front end and prevent wrongful convictions from happening in the first place.”

Ruiz was initially offered a plea deal of 1.5 to three years for this brutal crime, suggesting that prosecutors recognized the weaknesses of the evidence in this case. Ruiz rejected the plea offer and was ultimately sentenced to 8 ⅓ to 25 years in prison. He served the full 25 year sentence.  This highlights the deeply concerning problem of the “trial penalty,” in which defendants receive much longer sentences for the same crime if they choose to go to trial than if they had pled guilty. As a result, innocent people are often coerced to plead guilty to avoid the possibility of a harsher sentence at trial. Ruiz, who always maintained his innocence, chose to fight the charges and reject the plea offer; once convicted, he faced a far lengthier sentence.

“Today feels like a huge load off my shoulders and I look forward to living a good life moving forward.”

Ruiz’s conviction stemmed from a sexual assault that occurred on the rooftop of a Manhattan housing project in April 1984. The victim testified that she was walking in the Bronx when she encountered a man named “Ronnie,” an acquaintance of her boyfriend whom she had briefly been introduced to on one prior occasion, and that Ronnie took her to a building in Manhattan. After arriving at the building, they went to the 16th floor. Ronnie went into an apartment on the 16th floor and exited the apartment with two other men. The three men forced her to the rooftop and took turns sexually assaulting her.

Later that evening, the detective went to Rafael Ruiz’s home and told Ruiz that his name had come up as part of an investigation. The police took Ruiz to the precinct just after midnight, where Ruiz consented to be photographed without understanding how the image would be used. At about 2 a.m., a detective placed Ruiz’s photo with photos of five other men and showed the photo array to the victim. Except for Ruiz, all of the other men in the photo array had Afro hairstyles, despite the fact that the victim never told the detective that “Ronnie” had an Afro. Ruiz was the only man pictured in the array who had a hairstyle similar to the victim’s description. The victim identified Ruiz as “Ronnie,” a name Ruiz never used.

Just after the photo identification, the detective placed Ruiz in a one-on-one show up procedure. The victim was in an office with a one-way mirror, while Ruiz was the only man placed on the other side of the mirror. He was wearing the exact same clothing he wore in the photograph that the victim had identified moments earlier.

While Ruiz was incarcerated, he obtained the assistance of William M. Tendy, Jr. who was previously an Assistant District Attorney in the Trial Bureau of the New York County District Attorney’s Office. Tendy agreed to meet with Ruiz’s family to discuss the case. He initially believed he would not donate more than a few hours of his time to discuss the case, but once he came to believe that Ruiz was innocent, Tendy chose to spend the next three years working on the case without compensation and in his spare time. Through his investigation, Tendy discovered an alternate suspect who lived in the same building on the same floor where the crime occurred and who was known to neighbors as having a history of violence against women. This man fit the victim’s description of the assailant — and his name was Ronnie. Tendy concluded that the victim identified the wrong apartment on the 16th floor – and that the real Ronnie lived just across the hall. Tendy referred the case to the Innocence Project.

The Innocence Project and the New York County District Attorney’s Office’s Conviction Integrity Program began a re-investigation and arranged for DNA testing of the victim’s sexual assault kit. The same male profile was identified from semen in the victim’s vaginal and rectal swabs and underwear and from a hair in her pubic hair combings. Ruiz was excluded as the source of all samples tested.

While New York enacted a law in 2017 that mandates best practices for eyewitness identification procedures, none of the new requirements in the law would have prevented any of these missteps in the procedure had the identifications been conducted today, suggesting that the same issues that plagued this process could still happen today.