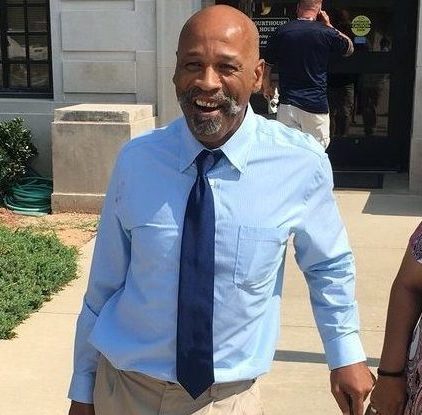 Perry Lott walks out of prison on July 9, 2018 after spending 30 years in prison for a crime he did not commit.

Today, Innocence Project client Perry Lott walked out of prison after 30 years of wrongful incarceration in Pontotoc County, Oklahoma. Despite exculpatory DNA evidence, District Attorney Paul Smith offered Lott a sentence modification in the form of time served. Lott agreed to accept this settlement so he can move forward with certainty in regaining his life and not risk years of litigation while a motion to vacate his conviction is resolved in the courts.

“We believe that DNA and other new evidence clearly establish Perry Lott’s innocence and show that the last 30 years he has spent incarcerated were years stolen from him by the State of Oklahoma,” said Innocence Project Senior Staff Attorney Karen Thompson, who represented Lott alongside local counsel Douglas Parr. “No physical evidence has ever connected him to these crimes.”

Perry Lott walks out of prison today after 30 years of wrongful incarceration. He had to take a plea of sorts, despite DNA evidence excluding him on the victim’s vaginal swab. But freedom is a precious thing. Perry will take it and so will I. pic.twitter.com/L8dOcTVztF

In November 1987, at 1:15 a.m., the victim felt a gun to her head as she unlocked the door to her house. A man then pushed her into her house, took $120.00 from her purse and raped her. The victim described the perpetrator as a black male between 5’7” and 6’2” with a partial gold tooth in the front. She could not determine his hair length or body size because he was wearing a cap and a jacket.

While filming a Crimestoppers re-enactment video about the rape and robbery near the victim’s home, Detective Mike Baskin directed Detective Jeff Crosby’s attention to “a black guy parked on 15th Street.” Detective Crosby approached the car, spoke with the man—who was later identified as Perry Lott—and asked for identification. Detective Crosby testified that during their conversation, he “noted” Lott had a gold tooth.

Lott told Detective Crosby that he was in the area to see his girlfriend who lived nearby. Lott further explained that he had been with his fiancée the night before, from 3:30 p.m. until 6:30 a.m. the next morning when he left for work. Despite this alibi, the detectives asked Lott to go to the police station for further questioning.

Two days later, after police told the victim that the perpetrator had been caught, Lott was put in a formal lineup. None of the other “fillers” in the line up had gold teeth; they were instead given gold foil from a local flower shop to cover their teeth as a means of simulating the partial gold tooth allegedly described by the victim. Based on this lineup, the victim selected Lott.

In 2014, the victim would tell an investigator about the lineup, “But I can’t think of anything that overly stands out that made me select him . . . I kept thinking, what if I choose the wrong one?”

In 2014, the victim would tell an investigator about the lineup, “But I can’t think of anything that overly stands out that made me select him . . . there wasn’t nothing, you know, that screamed, hey, it’s me . . . I kept thinking, what if I choose the wrong one?”

At trial, police acknowledged that the only suspect in the lineup without gold foil on their tooth was Lott. In addition, although the victim testified her perpetrator was clean-shaven at the time of the rape, at the time of the lineup, Lott had at least “a few days’ growth of moustache.” Lott presented an alibi defense at trial, noting that the day before the rape he had been with his fiancée at court on a bond hearing and then home all night.

Despite this powerful new scientific evidence revealing Lott’s innocence, current District Attorney Paul Smith has refused to grant post-conviction relief to Lott. Smith also objected to testimony from an eyewitness identification expert about the frailty of the victim’s identification.

Having been wrongly convicted once and deeply concerned that it could happen a second time given the prosecutor’s posture in the case, today Lott agreed to a sentence modification in the form of time served. He regained his freedom today for the first time in 30 years.

“The Innocence Project is thrilled that Mr. Lott is now free,” said Attorney Thompson. “We will continue to stand with and by him and his loving family as he bravely re-enters a new world.”

“This is what freedom looks like!” Perry Lott after being released from custody in Pontotoc County, OK. pic.twitter.com/eHo5xRMkco