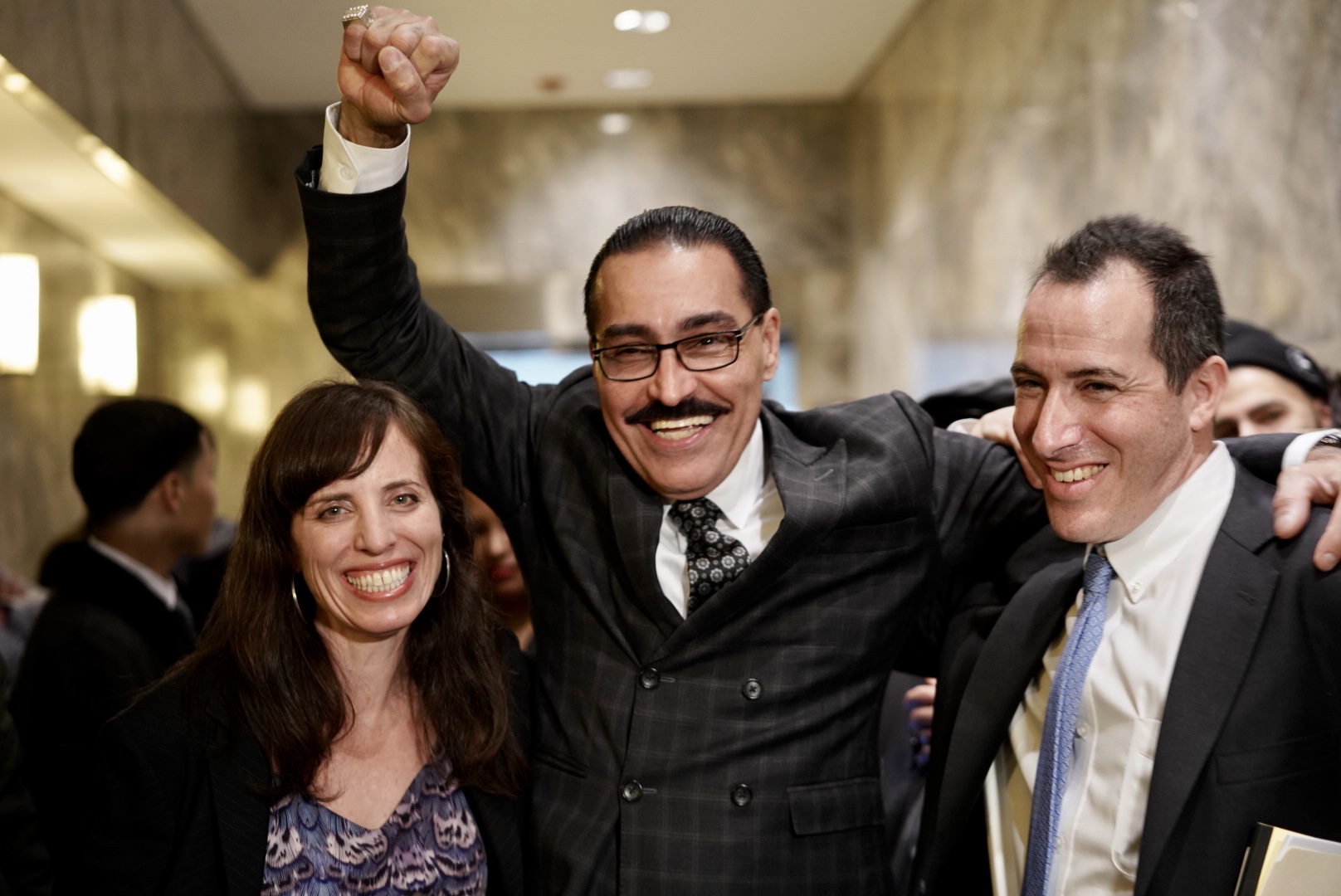 Felipe Rodriguez (center) after his hearing with his attorneys Nina Morrison, senior litigation counsel at the Innocence Project, (left), and Zachary Margulis-Ohnuma (right), at the Queens County Supreme Court on Dec. 30. Credit: Sameer Abdel-Khalek for the Innocence Project.

(New York – December 30, 2019) Today, the Hon. Joseph Zayas of Queens County Supreme Court granted a motion to vacate the 1990 conviction of Innocence Project client Felipe Rodriguez and entered an order dismissing all charges against him. Rodriguez served 27 years in prison before today’s exoneration.

Notably, today’s exoneration was the result of a reinvestigation into Rodriguez’s claim of innocence and the evidence that led to his conviction by the Queens County District Attorney’s Office (QCDA), which it began at the Innocence Project’s request three years ago. That investigation revealed newly discovered exculpatory evidence in the police file that was unlawfully withheld from Rodriguez’ defense attorney. This evidence directly contradicts key portions of the state’s already weak case against him presented at the 1990 trial.

Rodriguez was granted a commutation of sentence by Governor Andrew Cuomo exactly three years ago today, on December 30, 2016. He was released from prison on January 2, 2017. Since his release, Rodriguez has gotten married and worked steadily at the Row Hotel as a member of the Hotel Trades Council Union (HTC). HTC leadership, moved by Rodriguez’s story and his record of achievements in prison, gave him the opportunity to rebuild his life with a living wage after release despite the fact that he still had a murder conviction on his record until today.

“We are thrilled that Felipe is finally cleared of this wrongful conviction, and grateful to the DA’s Office for reinvestigating the case, providing us with key documents they uncovered and joining our motion to vacate,” said Nina Morrison, senior litigation counsel at the Innocence Project. “But amidst the joy of today’s exoneration, let’s not forget that Felipe’s wrongful conviction could well have been prevented three decades ago if he’d received a fair trial and the jury had heard the evidence presented in court today.”

Added Margulis-Ohnuma, “Felipe Rodriguez is an inspiration to all of us in his tireless quest to prove his innocence, and in his kindness and generosity to everyone he has encountered in and out of prison over the last 30 years. It’s an honor to stand next to him as his wrongful conviction is finally cleared from his record and he begins a new chapter of his life.”

Rodriguez was convicted of the 1987 murder of Maureen McNeill Fernandez based largely on testimony of a police informant who himself was a suspect in the murder. Sixteen months after the murder, that witness, Juan Ramos, claimed that Rodriguez borrowed his car on the night Fernandez was killed and essentially admitted to the crime the next morning — all of which Rodriguez has always denied. Ramos also admitted in a secretly recorded pretrial interview that he had repeatedly lied to police and was coerced into giving statements about his car’s alleged involvement in the crime.

The district attorney’s reinvestigation yielded additional police documents, never before disclosed to the defense, showing that Ramos had yet again changed key details of his account before testifying, further undermining his already shaky credibility. In addition, starting in December 2017, Ramos admitted to a defense investigator that he fabricated his entire testimony against Rodriguez, and stood by his recantation in a recent interview with the QCDA.

Other documents provided by the QCDA to the Innocence Project and Margulis-Ohnuma in recent months contained additional material evidence that would have strongly supported Rodriguez’s innocence that the jury never heard about because it appears they were withheld from the defense. (Rodriguez’s lawyer, Jenny Maiola, was disbarred in 1995.)

Unfortunately, DNA evidence from the crime scene and autopsy that could have provided scientific proof of Rodriguez’s innocence was destroyed years before the Innocence Project took on his case. However, today the district attorney’s office took the extraordinary step of agreeing to vacate Rodriguez’s convictions and dismiss all charges based on the serious violations of his right to a fair trial that the prosecutors’ reinvestigation had uncovered.

Notably, Rodriguez’s exoneration, based on prosecutors’ agreement that he was unlawfully deprived of critical evidence supporting his defense in 1990, comes just two days before a major overhaul in New York procedures regarding defendants’ access to evidence in criminal cases goes into effect.

In early 2019, New York passed a criminal justice reform package that made key reforms to the bail system and effectively repealed the “Blindfold Law,” which previously prevented defendants, including the innocent, from having timely and complete access to police files and other information about the State’s case. Without full access to discovery — the process by which evidence is disclosed prior to trial — while a person is awaiting trial, their defense attorney is unable to investigate their case and the innocent may be wrongfully imprisoned.

Prior to passage of the new law, New York had one of the four worst discovery statutes in the country. As a result, defense attorneys lacked access to key evidence, such as witness statements and police reports, significantly hindering their ability to advise their clients and develop effective cases.