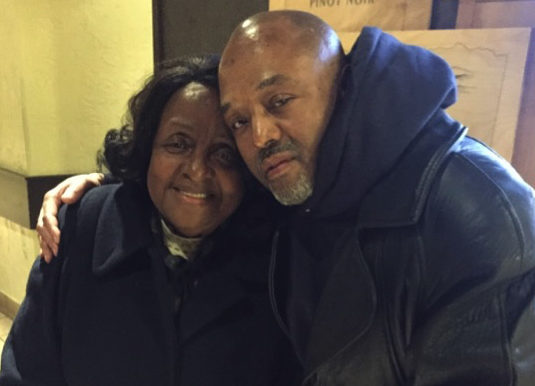 In 2017, Innocence Project client Leroy Harris had to make one of the hardest decisions of his life. He had already served 28 years in prison—he could continue serving the 50 plus years remaining on his sentence or accept an Alford plea in exchange for his freedom. The Alford plea would allow Leroy to maintain his innocence, but he would still have a felony record for a crime he did not commit.

Related: Lamonte McIntyre: My mom’s love is what kept me going

While it was a difficult decision for Leroy, he realized he could not spend another day away from his loved ones, especially his mom, Evelyn Harris. Evelyn believed in Leroy’s innocence from day one. No matter how painful the experience was for either of them, she remained optimistic and kept him going through his darkest days.

As one can imagine, waiting for Leroy to come home for nearly three decades took a toll on Evelyn’s health. The thought of losing Evelyn while Leroy was still incarcerated was the impetus for his decision to take an Alford Plea.

On November 21, 2017, Leroy was released from prison. After having spent over 10,000 days being wrongly convicted, Leroy was finally able to hug his mother without being separated by prison glass. Their bond was unbreakable.

With Mother’s Day approaching, Leroy is excited to honor his mom, whom he calls “the biggest champion of his freedom.” He is planning to take her to eat her favorite dish—fried fish and okra—and bask in her joy of finally having each one of her 14 children with her.

Join us in honoring Evelyn and all the moms who stood as their children’s rock through the worst of times. This post is the first of a four-part Mother’s Day series. Follow the Innocence Blog to read other stories about exonerees, their mothers and their children.