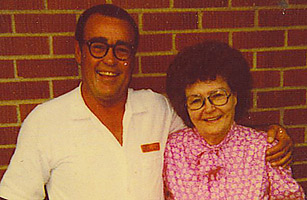 On December 7, 2000, Claude Jones was executed in Texas for a murder he always maintained he didn’t commit. Nearly a decade after his execution, DNA testing proved in 2010 that the central evidence tying Jones to the crime scene — a hair fragment — was not his.

Timeline of events in the case

Media Coverage of the Case


In November 1989, Allen Hilzendager was shot to death while working at a liquor store in San Jacinto County, Texas. Claude Jones was arrested for the crime with two co-defendants, Timothy Mark Jordan and Kerry Dixon.

A father and his 14-year-old daughter who were working on a car across the street were the only witnesses to the crime, and neither were able identify the perpetrators. At trial and later on appeal, the key evidence against Jones was a small hair sample that was found on the counter near the victim’s body. A chemist for the state, Stephen Robertson, initially claimed that the sample was too small for testing, but at trial Robertson testified that the hair could only belong to Jones, and not to Dixon, the victim or the 12 other people tested. When asked in a separate civil lawsuit why he changed his mind and decided that he could analyze the sample, Robertson said he did not know.

An independent hair analyst subsequently concluded that the sample was in fact too small for proper analysis. The only other evidence linking Jones to the crime was the testimony of co-defendant Jordan.  Under Texas law, the testimony of an accomplice alone is insufficient to prove guilt.  At trial, Jordan testified that Jones confessed to him that he had committed the murder.  This however differed from his grand jury testimony where he testified that Dixon told him that Jones was the one who shot Hilzendager.  Jordan later signed an affidavit saying that Jones didn’t confess to him but that he was pressured to say so by the police who threatened him with the death penalty.  In exchange for his testimony, Jordan was allowed to plead to a lesser charge and received a 10 year sentence.  Dixon was convicted of aggravated robbery in connection with the murder and is serving a life sentence.

In 2007, Mayer Brown LLP, on behalf of The Texas Observer, the Innocence Project, the Innocence Project of Texas and the Texas Innocence Network, asked the San Jacinto County District Attorney’s office and local officials to consent to DNA testing and preserve the evidence while considering the request. After the request was denied, the group of organizations filed a lawsuit requesting DNA testing on the evidence. A Texas judge ordered the tests in June 2010, and in November 2010 the results proved that the hair was not from Claude Jones.

In Texas, Seeking the Truth About An Executed Man