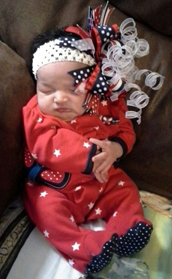 This year on Independence Day, the Innocence Project celebrates good news for our client, Sedrick Courtney. Courtney and his wife, Tina, have recently welcomed daughter Ja’Kobe Jean into the world and are getting her into the festive spirit to help celebrate Courtney’s first Independence Day as an exonerated man since his ordeal began in 1995.

Cleared through DNA testing in July 2012, Courtney is one step closer to winning compensation for his 15 years of wrongful imprisonment. An Oklahoma Supreme Court decision this week has paved the way for Courtney to sue for compensation from the state.

Oklahoma is one of 29 states that offer statutory compensation to the wrongfully convicted, though the amount, at a maximum of $175,000, falls well below the national standard of $50,000 per year of wrongful imprisonment. So far, eight people have been exonerated through DNA testing in 2013. Learn how you can

Read coverage of the