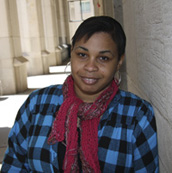 
In February, Nicole Harris was freed from prison when her murder conviction in the death of her four year old son was overturned. On Monday she was fully exonerated when State’s Attorney Anita Alvarez announced that she had decided to dismiss the charge against Harris.

Harris spent nearly eight years at downstate Dwight Correctional Center. In the four months that followed her release, Harris was haunted by the threat of a retrial. Harris’ son, Jaquari Dancy was discovered in his room by his father with a fitted bedsheet cord around his neck in 2005. Police approached Harris while she was in a hospital chapel and brought her to the station for questioning. After being interrogated for over 26 hours, Harris confessed to killing her son.

Harris, 23 at the time, immediately maintained her innocence and argued that the confession was physically and psychologically coerced. Six weeks after Harris’ interrogation, Illinois passed a law requiring that interrogations in homicide cases be electronically recorded.


“You just don’t know until you are in that situation,” said Harris, a soft-spoken college graduate who worked with hospice patients while in prison. “You just want (the interrogation) to stop.”

When Jaquari’s body was found, he was alone in the bedroom with his 5-year-old brother. The day after his brother’s death, the 5-year-old told authorities he saw Jaquari wrap the cord around his neck while playing, but his testimony was barred.

Harris is represented by Northwestern University School of Law’s

and Jenner & Block LLP who first received her letters for pleading for help.


“I just don’t want this to happen to anybody else,” said Harris, who has spent the past few months getting reacquainted with her 13-year-old son, who lives with his father.

She had to explain to potential employers that while her murder conviction had been overturned, she might face charges again.

“It felt like I could not go completely forward,” said Harris, who hopes to get a master’s degree in counseling and work with people who are mentally ill. “I did not feel free.”

Supporters called her name and greeted her with tearful congratulatory hugs at Northwestern on Monday morning.