“I remember them coming in and taking Dad” 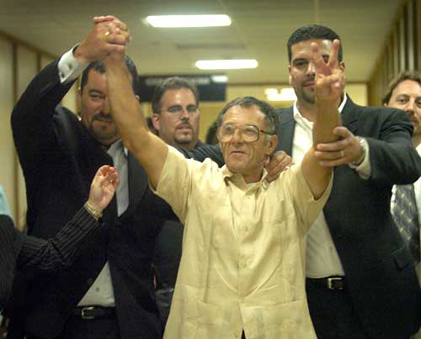 This Fathers Day, the Innocence Project pays tribute to the Diaz family, whose father, Luis Diaz was wrongfully imprisoned for 25 years. His three children fought for their father’s release and helped him adjust after he finally came home at the age of 69.

Luis became a suspect after a rape victim saw him at a gas station and thought that he resembled her attacker. Luis and Caridad Diaz were Cuban immigrants, and Luis had found work as a fry cook in Coral Gables, Florida, before his arrest threw the family into turmoil. His son Jose speaks of the night that his father was arrested, his father’s trial and the years of prison visits that the family endured:


“I see Mom coming out of the bedroom. Everbody was in pj’s. They tried to push the door down, and Mom opened the lock, all of a sudden we see a whole bunch of lights, and it was the police. They barged into the house almost knocking Mom down to the floor. Dad was saying “What happened?” He could say just a few words of English at that time. I remember that. I remember them coming in and taking Dad.

I remember being on trial, and when they gave him the three life sentences, he turned pale. He had an interpreter. He started crying, and it made me cry, and I got mad at the United States of America. I got mad at the Police Force. I got mad at God. I was in a living rage. In a young boy’s life, your father figure means a lot, and that was taken from me.

As the years passed and one appeal after another was denied, the family searched for solutions. Jose married and left home, but he continued to pursue his father’s release. He learned of the Innocence Project, and he and his wife wrote an impassioned letter for help:


“It has been many, many years now since our father has been in prison for a crime he did not commit. At this time we would like to ask you to please help us as our father is getting older as the days go by and is not able to spend time with his family —  sons, daughter, grandchildren who he loves very much —  because of an injustice that was committed.”

The Innocence Project helped secure the evidence and succeeded in getting permission to have the DNA evidence tested. Diaz was cleared and exonerated on August 3, 2005. Jose remembers:


“The day that he was released I was in a shock. I felt like a little kid again, and then I look to my side, and I see that I had a little kid and my wife. A lot had changed. We were jumping for joy. We didn’t know what to do with him. Every member of the family wanted a piece of him. It was overwhelming. It was as much of a shock as when they took him. Thank god we didn’t have heart attacks with emotion. What a day.”

Today, Luis Diaz has five grandchildren. The youngest two, 5 and 3 years old, were the first that Luis could spend time with as infants. Luis and the whole family live in Miami, Florida, and are active with the Innocence Project of Florida.

Many of the 308 people exonerated through DNA testing had children before they were incarcerated, and many Innocence Project clients in ongoing cases are parents, still separated from their children. For these parents, missing the opportunity to watch their children grow is often the greatest hardship of wrongful imprisonment. This Father’s Day, we remember them and we work toward their eventual release.

more about the Diaz case

who became dads after their release.