“I Did It” — New York Magazine on False Confessions 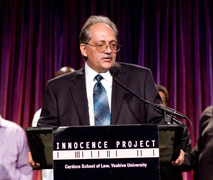 Innocence Project client Frank Sterling was exonerated earlier this year after serving 18 years in prison for a murder he didn’t commit. Sterling’s conviction was based almost exclusively on a false confession he gave after 12 hours in police custody and questioning which included hypnosis.

An article in this week’s issue of


delves into his case and the issue of false confessions.

Almost immediately after confessing, Sterling recanted. He had no criminal record of any kind, but police focused on him because his brother was incarcerated for attempting to sexually assault the elderly victim three years before she was murdered. In 1992, Sterling was sentenced to 25 years to life in prison, and he would not have been eligible for parole until 2016.

The article details how the Innocence Project, along with Sterling’s local attorney Don Thompson, appealed his conviction and requested DNA testing to prove the identity of the perpetrator. The DNA results implicated another man and excluded Sterling. That man is already serving a life sentence for murdering his four-year-old neighbor in 1994 — a crime that could possibly have been prevented if police had not focused on Sterling for the 1988 murder. Confronted with DNA test results linking him to the crime, the real perpetrator recently gave multiple detailed confessions that included facts that were not known to police or the public and have been corroborated by the prosecution.

Sterling says the police never asked him to say in his own words what happened. “Yes’ and grunts-that’s basically what the whole confession is about.” Regarding the color of (the victim’s) coat, he says, “I knew in the fall she always wore her purple jacket.”

I ask him what he thinks when he watches the twenty-minute confession video now. “When you look, you’ll notice I shake a little bit,” he says. “But to hold on to the whole cigarette and let the whole cigarette go to ash and never take a drag off of it? I’m a smoker. Normally, I would be sitting there dragging on it, not letting the whole cigarette just sit there burning down. Yeah, I was not in the right mind, looking back at it now.”

He knows some people will never understand why he admitted to a crime he didn’t commit. “They say, ‘Why confess if you didn’t do it?’ But they don’t have the whole understanding of what I was going through at the time. It’s like, yeah-I wanted to get it over with, get home, and get some sleep.”

He laughs softly. “Eighteen years and nine months later, I finally get to go home.”

Sterling is the 253rd person exonerated through DNA testing in the U.S.

Videotaping of complete custodial interrogations has been shown to prevent false confessions.

Learn more about reforms supported by the Innocence Project