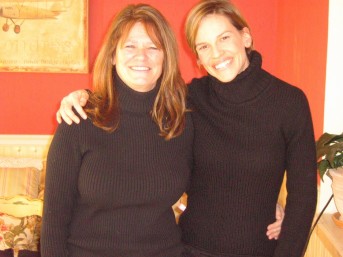 It was a decade ago that Hilary Swank saw the play “The Exonerated” and became interested in the issues surrounding wrongful convictions. “When someone's convicted of something that they didn't do, it doesn't only affect them. It affects their whole family,"

Swank was already a strong advocate of the org when offered the lead in "Betty Anne Waters," a film that tells the story of Waters and his sister, Betty Anne, and her struggle, alongside the Innocence Project, to get Kenny exonerated.

"Unfortunately, I never met Kenny. He died about six months after he was released," says Swank. "But from what his family has told me, he was as full of grace as the rest of the people I have met who have been exonerated."

In a recent interview with the Innocence Project, Betty Anne Waters says she hopes the upcoming film raises awareness about wrongful convictions and helps to free the innocent.

“If this movie can help one other person want to do the right thing—one other prosecutor consent to DNA testing, one other police officer look into their cases before jumping to judgment—I’ll be happy.”

Read about others who worked to help free their sons, fathers, brothers and husbands from prison in