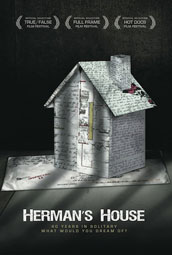 A new documentary about the unlikely friendship between Louisiana inmate Herman Wallace and New York artist Jackie Sumell will be screened at the opening night of the Harlem International Film Festival on Wednesday.

Co-presented by The Correctional Association of New York, “Herman’s House” explores the injustice of solitary confinement and the transformative power of art. It attempts to answer the question: “What kind of house does a man who has been imprisoned in a six-foot-by-nine-foot cell for over 30 years dream of?” The film will screen at 9 p.m. in the Langston Hughes Auditorium at the Schomburg Center for Research in Black Culture in New York.

Wallace and two other men are known as the Angola Three, named for the Louisiana prison where they collectively spent over 100 years in solitary confinement. Wallace was already serving time for a bank robbery when he came under investigation for the 1972 murder of a prison guard. According to court records, more than 200 inmates were questioned, none of whom were white. Wallace was convicted based largely on the testimony of another inmate who received special treatment in exchange for his testimony and sentenced to solitary confinement where he remained for more than three decades when he was moved to another prison where he is still confined to his solitary cell for 23 hours a day. The physical evidence that was collected from the crime scene was never tested and other evidence was lost. Another inmate has since confessed to the murder.


Learn more about the film