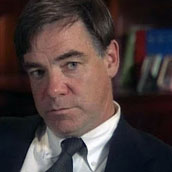 
My seminar on criminal prosecution, for law students working essentially as Assistant District Attorneys in their third year, is a self-selected group, drawn towards public service. Many are future prosecutors, some future defense attorneys and some plan on running for public office themselves. They are enjoyable to work with and have already moved outside of the academic comfort zone and rarified air of Harvard Law School by choosing a clinical experience.

They spend their days in court, and our class meets in the evening. It’s a discussion course. We explore, sometimes heatedly, the range of issues prosecutors must face: judgments about which cases to bring, what kinds of punishments to seek, how to prepare witnesses, how to spot exculpatory evidence, etc.

But no class discussion matches the “shock and awe” approach of meeting an innocent man who did nearly two decades in prison for horrible rapes that he didn’t commit. Students forget a great deal of what I say in class. However, none forget the soul-searing experience of meeting Dennis Maher and hearing his story.

Dennis is a truly remarkable man who has shared his story with my students year after year. When I first asked Dennis to come and speak four years ago he was joined by the prosecutor from his 1983 trial, J.W. Carney, who eventually helped Dennis reverse the conviction.

Students – who have been told only just before the class that the guest will be someone involved with the prosecution of the case – are generally dumbstruck. One year, a student sobbed softly throughout his entire presentation.

Maher’s story is Kafkaesque. DNA evidence was not introduced into Massachusetts’ courtrooms until 10 years after his initial convictions, and he was still hitting dead ends as a pro se litigant. With help from lawyers from the Innocence Project and the

, some nine years later still, “lost” files – including evidence that could be tested for DNA – were located and proved his innocence.

The Maher case is also a stark lesson in the way mistakes are made. Although there was some police misconduct in a third sexual assault case brought after Maher’s first two charges, two of the three crimes he was wrongfully convicted of involved a simple mistaken identification. Even with highly competent, well-intentioned prosecutors, things can go wrong.

I don’t expect my students to achieve perfection in their legal careers. But I do expect them to acknowledge the potential for failure within the criminal justice system and to remember, through Dennis’ cautionary tale, just how much is at stake.


Watch Dennis speaking at a University of Massachusetts event