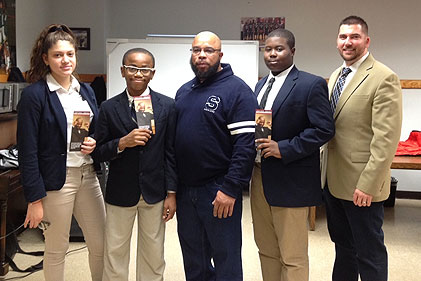 Photo: Gerard Richardson after speaking to students at the Patrick School in New Jersey

It’s been five years since DNA testing proved Steven Barnes innocent of a New York murder for which he spent nearly twenty years in prison. He was released two days before Thanksgiving in 2008 and exonerated six weeks later in January 2009. And it hasn’t even been a month since Gerard Richardson walked out of a New Jersey prison after serving 19 years behind bars for a murder that new DNA evidence shows he did not commit. As we approach Thanksgiving, the Innocence Blog caught up with both men to see how they plan to spend the holiday and learn what they have done since regaining their freedom.


In the years following Barnes’ exoneration, he worked as a counselor for troubled youth, purchased his first home and gained a greater appreciation for the Thanksgiving holiday. Throughout the two decades Barnes was in prison, he remained close with his family whose support never wavered. But according to Barnes, nothing is as good as spending the holidays together.

“Thanksgiving has been more special to me in the past five years than it was the years before my wrongful conviction,” Barnes said. “It’s a happy time, we don’t think about the past. I’ve got my life back, so we’re all happy.”

He will be spending Thursday with his immediate family just as he does every year. “Everything is good. Freedom is good. You should live each day as a holiday.”

While Richardson will also spend the day with family on Thursday, he kicked off Thanksgiving early this past Sunday when his family hosted a coming home get-together/pre-thanksgiving bash in his honor. In attendance were about 100 close family members and his Innocence Project legal team.

“[T]he students, the whole team working on weekends, doing whatever they could for me . . . I love all of them for real. When I tell them ‘I love you,’ I mean it sincerely. They helped me get something back that I couldn’t get on my own. I consider them my friends for life, not just my legal team.”

When Richardson was behind bars, Thanksgiving was much like every other day, but all of that has changed in the past month.

“[I]n prison, you see Thanksgiving as just another day,” Richardson said, “. . . [but] you can’t help but think about what’s going on outside, wondering what your family is doing and wanting to be there for them. . . . It’s special now that I’m home and can spend this time with my family.”

Even though Richardson missed his family throughout his time in prison, he says that he just tried to remain optimistic about his future and to keep busy. To help pass the time, he mentored younger inmates, tutored others and helped people learn to read and write.

“I didn’t have my family come visit that often and I didn’t keep calling them because it was expensive. Someone had to pay for all of that. So I wrote letters. As long as I knew they were O.K., I was O.K. While I was away, they still had to keep going.”

Richardson is now awaiting a December 17 court date, at which the prosecution will decide if they will dismiss the charges — formally clearing him — or retry the case. For now he is focusing on all of the good in his life.

“I’m lucky to come home to the support and love of my family. I know everyone doesn’t have that; relatives die or they lose contact with you when you’re behind bars,” Richardson said. “I’m not mad and bitter. That went away over time. You just gotta let it go, otherwise it will kill you, and you won’t be able to move on.”