Happy New Year from the 2012 Exonerees! 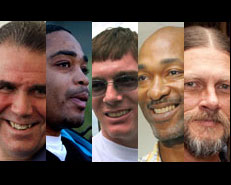 The five Innocence Project clients who were exonerated through DNA testing in 2012 look forward to a fresh start and newfound freedom in 2013. Together, they served a total of 84 years in prison for crimes they didn’t commit. Their cases—each one distinct—also represent common failings in the criminal justice system. Here is an update from each of them about their hopes for the coming year and beyond:


2012 was a great year for Sedrick Courtney. In addition to his July exoneration, it was the year that he got married and got a new job as a forklift operator for Halliburton. Freed on parole in 2011 after 15 years in prison, Sedrick and his new wife have been busy making up for lost time. The couple will be having their first child together in 2013. According to Sedrick, he’s “looking forward to his new baby and hopes to continue to be blessed by God.”


Since his April exoneration, Robert Dewey has been enjoying rides out on the open road on his motorcycle and reconnecting with family and friends. But his biggest dream for 2013 is to meet his grandchildren who live in Kansas. Robert’s son died during his 17 years behind bars, and he was not able to attend the funeral. To learn more about the trip and help Robert finance it, click

. Robert also plans to work with the Innocence Project and local legislators to enact a compensation statute in Colorado, which currently offers nothing to the wrongfully imprisoned and exonerated after release.


Michael was wrongfully incarcerated from the age of 15 and finally released earlier this year at the age of 32. During his 14 years behind bars, he completed a GED, an associate’s degree in liberal arts, and licenses and certificates in culinary arts, custodial maintenance and cosmetology. Michael hopes to open a barbershop one day. “I really hope to be somewhat established next year, whether it be working or just being financially straight and opening my own business. I have hopes to be an entrepreneur.”


After 15 years on Louisiana’s death row, Thibodeaux relocated to Minneapolis in September. He has recently moved into his own efficiency apartment. “It’s small,” he says. “But it’s bigger than my last accommodations, and I have the keys to it.” When asked what his plans are for the coming year, he has a single-word response: school. He plans to study to become a paralegal. Does he hope to practice law someday? “Let’s see where this takes me,” he says.


David Wiggins has been enjoying his freedom and reconnecting with family after 23 years in prison. Since his August release, he’s been living in Fort Worth with his brother. But in 2013, he hopes to get his own place. “I’ve been looking at houses on the lake. I’ll put me a fence around it and a couple of dogs and hopefully a boat dock.” The Texas compensation package will allow David to get back on his feet in a way that wouldn’t be possible for exonerees in many other states. “It’s all new,” he says. “I learn stuff every day—about cell phones and computers and different things that are here now that weren’t there then.”

The Innocence Project welcomes the New Year with our exonerated clients, and those we’re still fighting for. Together, we are full of hope for change and gratitude for our supporters.