Half a Life Behind Bars, Two Years Free 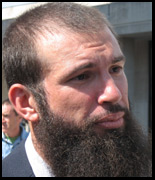 Jeff Deskovic was exonerated on November 2, 2006, after spending half of his life in prison for a crime he didn’t commit. Sunday marks the second anniversary of his exoneration.

On November 15, 1989, a teenage girl was out taking pictures for her photography class in Westchester County, New York. Two days later her body was found by police dogs, and she appeared to have been raped. Sixteen-year-old Deskovic first became a suspect because he was late to school the day of her disappearance. Although he was a classmate of the victim and they shared two classes together, police grew more suspicious when Deskovic began his "own investigation" of the case.

Detectives asked him to submit to a polygraph test, and they brought the young Deskovic to a private polygraph business run by local officers. During the test, no lawyers or parents were involved, and he was only given coffee. He spent over six hours inside the small room as detectives continued to interrogate him, claiming he failed the tests. By the end of the interrogation, Deskovic was crying and curled up under the table. After six hours of questioning and three polygraph tests, Deskovic allegedly confessed to committing the crime.

At the trial the police misconduct was ignored, and details were distorted by the state. While DNA tests on the rape kit excluded Deskovic as a source of the semen, the state argued the victim had consensual sex before the crime and that Deskovic murdered her in a jealous rage. The jury was also told that he had confessed to the crime. Deskovic was convicted and sentenced to 15 years to life.

In January 2006, the Innocence Project took on Deskovic’s case, and sought to retest the biological evidence using newer technology, making it eligible for the state DNA database. The results matched a man already in prison for another murder.

Deskovic was 33 when he was released. Upon his release he spoke of the bond he felt with the victim, "We had a commonality. We were both victims of the man who killed her — in different ways, obviously. She is more of a victim than I am, but I am still a victim."