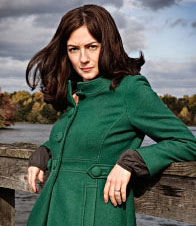 Co-Author, "Picking Cotton: A Memoir of Injustice and Redemption"

Writing Picking Cotton has taken me from a hotel lobby in Greensboro to the New Jersey Senate Judiciary Committee hearing on the abolition of the death penalty, from the lethal injection chamber in Raleigh’s Central Prison to the streets of Savannah, GA.  Once, while in San Francisco for the Soros Fellowship Conference, I even found myself at Alcatraz with Jennifer and Ron, sightseeing. When the tour invited us to step inside a solitary confinement cell, Ron hung back. “Not going in?” I asked, after Jennifer and I took our turns inside the dark cramped cell. “Hell no,” he replied, laughing. It was just one of many moments that reminded me that their seemingly ordinary, decades-old friendship is just as improbable as Ron, who spent nearly eleven years of his life wrongfully incarcerated, wanting to visit a prison on his day off. The journey, suffice to say, has been incredible, bringing me deep into some of the complex issues surrounding wrongful convictions and forever changing the way I will think about crime and punishment in the United States.

“I don’t know if I’ll be of any help at all,” Jennifer’s rape crisis counselor told me the spring afternoon I went to interview her at Elon College. What could she remember, after all this time? But it became very clear as we spoke that she had one particularly strong memory: the day she accompanied Jennifer to the physical lineup. “I remember it was one of the most take-your-breath away things, the fear,” she said. She vividly recalled the details of the physical lineup, mentioning the one-way window. I interrupted her to tell her in fact, there had been no glass, nor wall at all, as verified by the police report and the investigating officer. The seven suspects were standing merely feet away from both of them. She was astounded. “Isn’t that strange? In my mind, I had given us the distance of at least having a wall there. I had given us that safety.” She paused and then said, “How frightening. I think I prefer the safety of my memory.”

It was just a small example of the undercurrent that runs through the book— the fragility of memory itself. Their case has become a hallmark of the relationship between eyewitness misidentification and wrongful convictions because of how little we really understand about how memory works. I have seen Jennifer — and more recently

— vilified by people for their mistaken eyewitness testimony. It is further proof of the need to educate people about the many variables that can contribute to misidentification. By putting the reader in Jennifer’s shoes, I hope Picking Cotton helps to illuminate just how difficult making an eyewitness identification is—even when you are sure—and remind people everywhere that she was a victim of a brutal crime that derailed her life.  Jennifer pursued justice in the hopes that her assailant — whom she knew had gone off to rape a second woman an hour after she escaped—would never be able to hurt another woman. The failure was systemic—not personal—and her brave decision to forfeit her privacy (many victims never come forward in other wrongful conviction cases) is the reason many states have adopted reform measures.

Working on the book has also taught me that newly won freedom can be as bewildering as the first days of incarceration, which you can see once you shift to Ron’s point of view. Though many exonerees today make headlines for the millions of (well-deserved) dollars they receive after winning lawsuits, it is important to know that

is not one of those exonerees. When he first got out, he tried to return to school to get his GED, but eventually quit so he could take a second job and earn more money. He wanted to move out of his sister’s home and into an independent life. Now he works five, sometimes six days a week at an insulation plant, where the heat and the fumes take their toll on his sinuses. Lately, the faltering economy has impacted the work available at the plant. Ron’s regular shifts are no longer guaranteed, and he struggles to make ends meet.

As the first post-conviction DNA exoneree in North Carolina, Ronald Cotton’s case paved the way for many of the progressive measures the state later adopted. Jennifer actually helped to lobby the state to create the compensation bill that entitled Ron to roughly $110,000. Since that time, North Carolina has updated

twice, but Ron was excluded from the improved benefits (which, in addition to significantly more money, also include job training and tuition). Perhaps North Carolina officials will reconsider the terms of the statute and offer the same benefits to all six of its exonerees.

touches on many important issues in the innocence movement — the fact that the DNA was not destroyed though Ron had exhausted all of his appeals, the access he had to DNA testing, how simple changes to photo array and physical lineup procedures can reduce eyewitness identification errors, the importance of having state resources in place that can help the exonerated back on their feet, but most of all, it shows that the effects of wrongful convictions are devastating on both sides.

Ron waited 11 years for justice to prevail, but in the end, so did Jennifer.


Erin Torneo is the coauthor of "

Picking Cotton: Our Memoir of Injustice and Redemption

," the true story of an unlikely friendship forged between Jennifer Thompson-Cannino and Ronald Cotton, the man Cannino incorrectly identified as her rapist and sent to prison for eleven years.