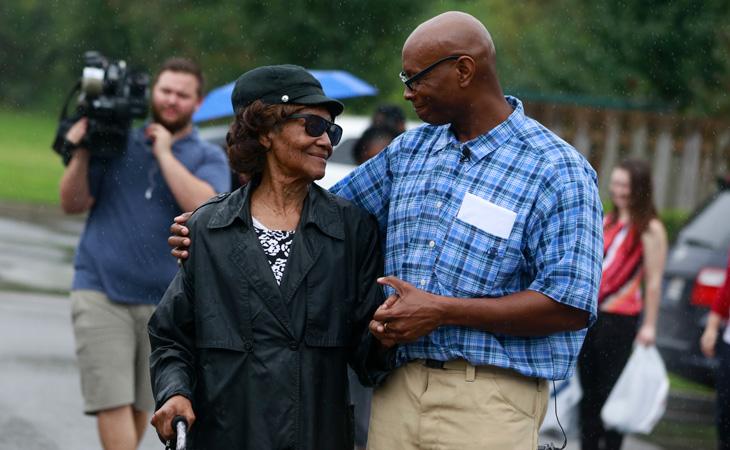 Darnell Phillips and his mother after his release. Photo by Keith Cephus Photography for the Innocence Project at the UVA School of Law.

(April 13, 2020 – Richmond, Virginia) Governor Ralph Northam signed legislation to strengthen Virginia’s writ of actual innocence law, representing the most significant improvements for overturning wrongful convictions in over a decade. The improvements hold promise for Virginians like Darnell Phillips, who has been unable to overturn his 1990 rape conviction despite compelling evidence of his innocence.

House Bill 974/Senate Bill 511, sponsored by Delegate Charniele Herring (D-Arlington) and Senator John Edwards (D-Roanoke) and signed by the Governor, removes restrictions in the writ of actual innocence law that have made it nearly impossible for wrongfully convicted people to obtain relief.

“This is a seismic shift for exonerating innocent Virginians,” said Shawn Armburst, Executive Director of the Mid-Atlantic Innocence Project, which is dedicated to overturning wrongful convictions in Virginia, Maryland and Washington, D.C. “Many of our clients have been denied justice for so long under these laws, and now they can finally live up to their potential to overturn wrongful convictions and reveal the truth.”

Darnell Phillips has been among those impacted by the previously restrictive writ of actual law. After spending 27 years in prison, Phillips was released on parole in 2018. He traveled to Richmond during the legislative session to ask lawmakers to fix the law.

“After so many decades, testifying at the Capitol was the first time anyone from the Commonwealth of Virginia ever really listened to my side of the story. When I heard the law passed, I never felt so good. Now I have a fair shot at proving my innocence.”

In 1990, Phillips was convicted of raping a 10-year-old girl in Virginia Beach. In 2001, DNA testing of hair evidence excluded Phillips but his petition for relief was rejected on procedural grounds. Over a decade later, DNA testing on additional items recovered by the Virginia Beach Police Department also excluded Phillips, and the victim stated that she had not actually been able to identify her attacker and only identified Phillips because of lies told by the police.

Despite this compelling new evidence, the Virginia Supreme Court rejected his writ of actual innocence in 2018. His petition was denied because the DNA testing was conducted at a private laboratory and the court did not believe the new information met the high standard of proving “clear and convincing” evidence of innocence.

“These legislative changes represent a major step in much-needed post-conviction criminal justice reform in Virginia. We are optimistic about increased access to justice for the wrongfully convicted in the Commonwealth,” said Deirdre M. Enright, Director of the Innocence Project Clinic at University of Virginia Law School.

Only four Virginians have been granted relief under the Writ of Actual Innocence law since it was created in 2004. The new law would remove hurdles to allow innocent people to overturn wrongful convictions by: