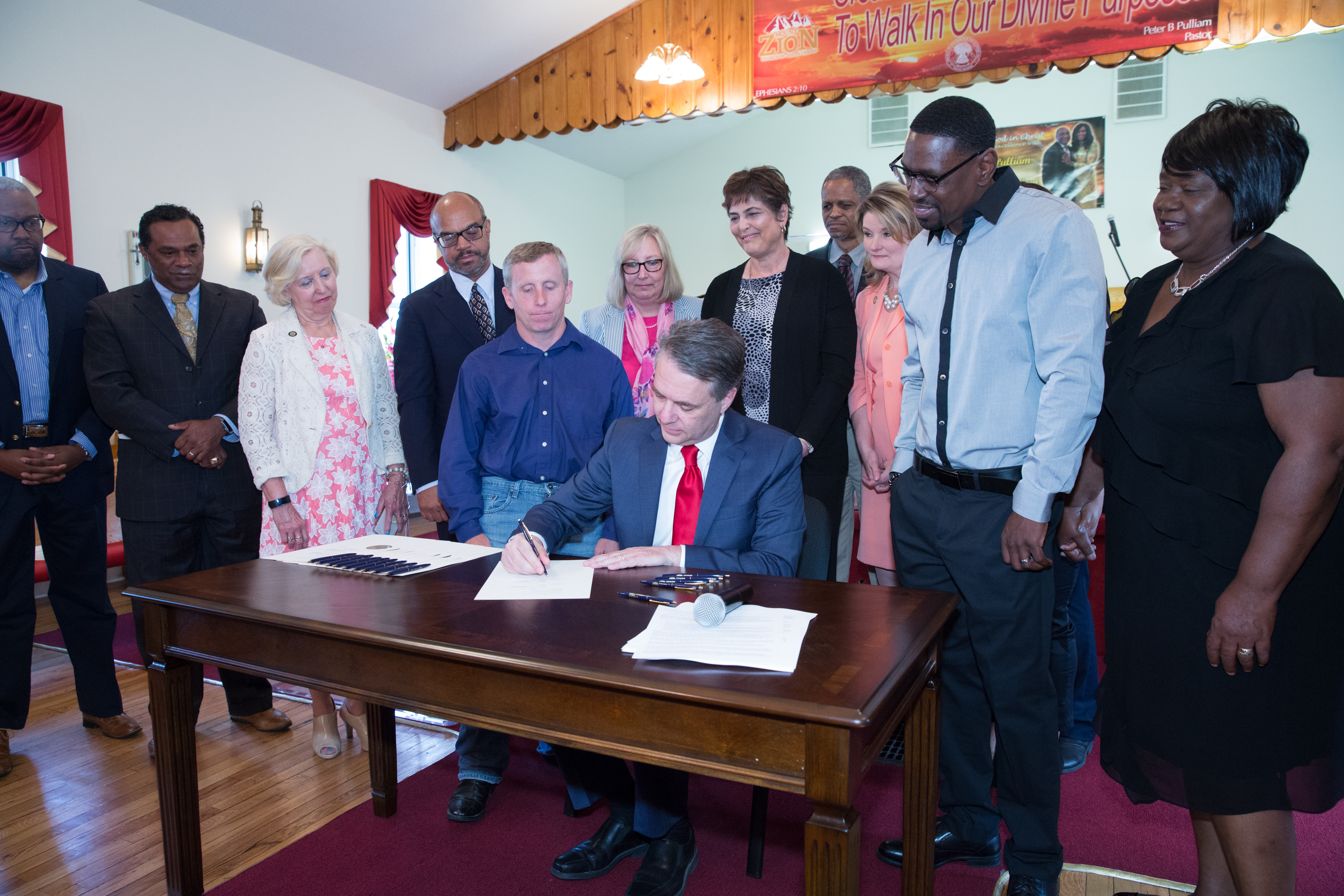 Today, Kansas Governor Jeff Colyer signed one of the strongest laws in the nation providing state compensation for innocent people who were wrongfully convicted  (House Bill 2579). Lamonte McIntyre, who spent 23 years in prison, and Floyd Bledsoe and Richard Jones, who each spent 16 years in prison for crimes they did not commit in Kansas were also present, along with the Midwest Innocence Project, which represented all three men. Kansas is now the 33rd state to enact a wrongful conviction compensation statute.

Bledsoe was exonerated in 2015, and McIntyre and Jones were exonerated in 2017. Without a state compensation law in Kansas, the men were left without any financial assistance to rebuild their lives when they were released.  Lawmakers who were moved by their stories decided to take action. Kansas State Representatives Blaine Finch (R-Ottawa), John Carmichael (D-Wichita), and Bradley Ralph (R-Dodge City), and Senators David Haley (D-Kansas City), Molly Baumgardner (R-Louisburg) and Rick Wilborn (R-McPherson) were integral in developing and passing the legislation.

“This is a big step in righting wrongs and helping me start to rebuild my life. It will help to restore some of what was taken from me like my inherited land and my income. Nothing will make up for the loss of my freedom and the pain of missing my two boys growing up, but it is a very good starting point,” said Bledsoe.

“The passing of this law ensures security for those like me who have been wrongfully incarcerated and is a major step in correcting a wrong. This law will allow me the opportunity to have a fresh start at living a productive life as a free man,” said McIntyre.

“This is not only a victory for all exonerees but also for the state of Kansas. In 2001 when I started serving a 19-year sentence for a crime I didn’t commit, you couldn’t have convinced me that change was coming, that there was light at the end of that long, dark tunnel. But now that light shines bright and I’m proud to be part of that light and that positive change,” said Jones.

“We are thankful for all the work legislators have put into this important law. Kansas took a critical step towards justice in passing such a strong law to compensate the innocent, and we hope that the neighboring states we work in—Missouri, Nebraska, Iowa and Arkansas—will take notice and follow Kansas’s lead,” said Tricia Bushnell, Executive Director of the Midwest Innocence Project.

“Kansas will have one of the best compensation laws in the country—it provides a fair amount for each year an innocent person spent behind bars, social services and a straightforward process for exonerees to obtain the resources they need in a timely way. Representatives Finch and Carmichael and Senators Haley, Baumgardner and Wilborn put the best aspects of what other states have done in this law, and now the wrongfully convicted can finally get the help they deserve,” said Michelle Feldman, Legislative Strategist at the Innocence Project in New York, a national organization that works to address and prevent wrongful convictions which is affiliated with Cardozo School of Law.

“It’s imperative that government follow the same rules we teach our children: when you make a mistake apologize and make it right. This bill begins to right the wrongs visited on those who have been wrongfully convicted and allows the innocent a chance to rebuild their lives,” said Representative Blaine Finch.

“As Chairman of the Senate Judiciary Committee I am honored and very proud to have been a central part of the wrongful conviction legislation. Credit goes to the many whom have contributed. Thank you to the revisers, the House Judiciary and Senate Committees, the conferees, our ranking member Senator Haley, who has been passionate about this issue, and Senator Baumgardner who helped take the lead on bringing this legislation to the governor’s desk. I feel very strongly this legislation could be a model for the United States,” said Senator Rick Wilborn (R-McPherson).

“Imagining the nightmare of being innocent and incarcerated of a crime one never committed is probably what drove this bill to pass both chambers of the Kansas Legislature unanimously. Recouping restitution from all parties knowingly contributing to not solving the actual crime but pinning one on someone else is the unfinished business of the foundation for justice Kansans celebrate today,” said Senator David Haley (D-Kansas City).

“I remained ever mindful of the sheer gravity of the loss of time, trust, opportunities, personal relationships and professional growth of wrongfully convicted individuals as I worked to expand our bill through the amendment process beyond that of a financial settlement,” said Senator Molly Baumgardner (R-Louisburg). “I am thankful that during this session the Kansas Legislature unanimously approved a comprehensive, multifaceted compensation plan that attempts to address our shameful gap in Kansas law. But to be sure, I know we can never achieve adequate remedy for the personal loss of freedom at the hands of an errant criminal justice process.”