George Floyd was killed by a police officer in Minneapolis on Monday sparking protests across the country. 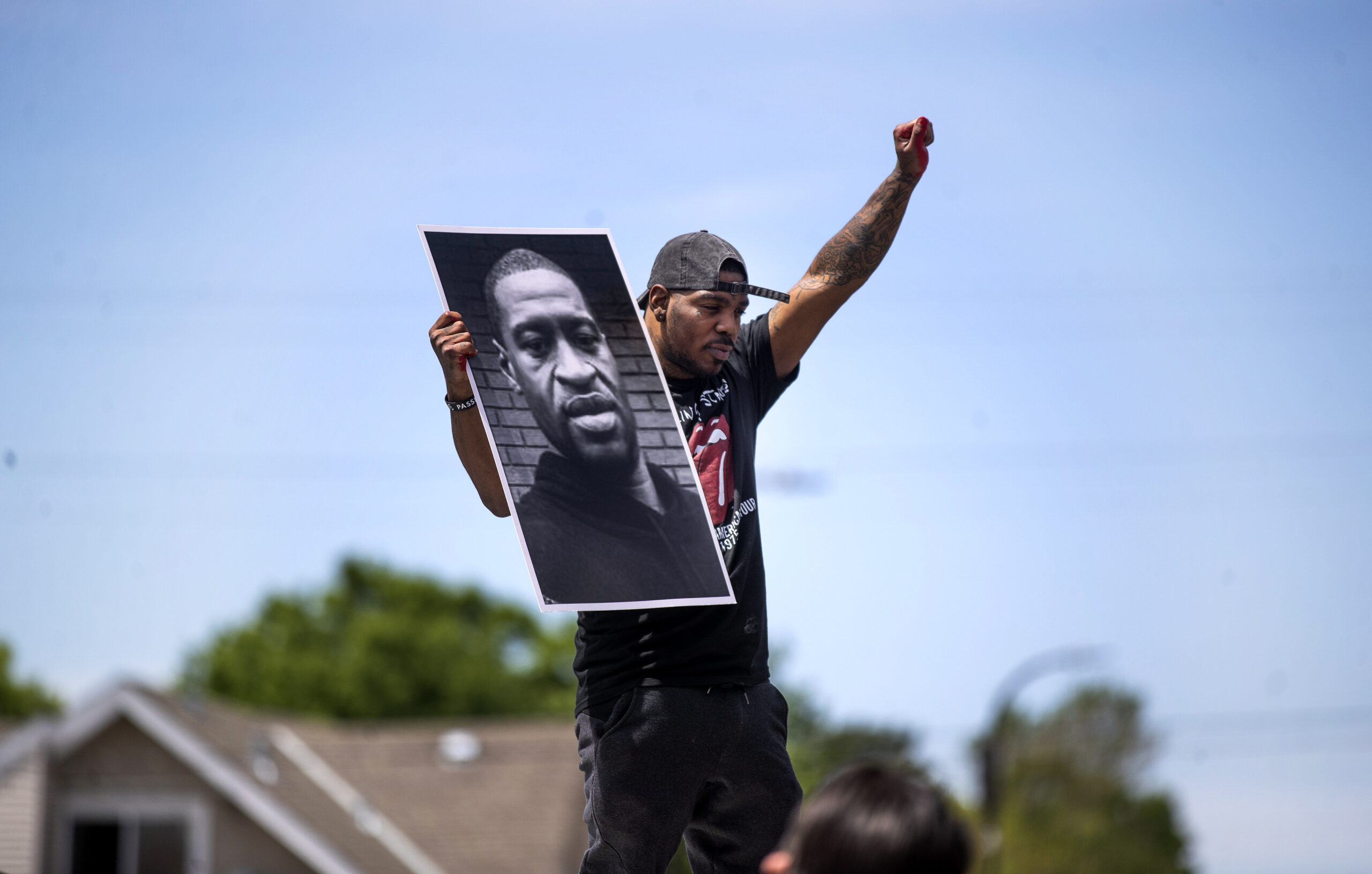 Tony L. Clark holds a photo of George Floyd outside the Cup Food convenience store, near where Floyd was killed, May 28, 2020, in Minneapolis. (Image: Jerry Holt/Star Tribune via AP)

Updated on May 29, 2020, 2:20 p.m. ET: Former police officer Derek Chauvin has been arrested and charged with third degree murder and manslaughter, CNN reported.

Outrage has erupted from Portland to New York after George Floyd, a 46-year-old Black man, was killed by a police officer in Minneapolis on Monday.

Video footage of the scene taken by a bystander shows officer Derek Chauvin, who is white, with his knee on Floyd’s neck, pinning him to the ground. Floyd, handcuffed and subdued, can be heard pleading with Chauvin to remove his knee.

Over four minutes, Floyd repeatedly cries out “I can’t breathe,” until he becomes unresponsive. Three other officers stand by, ignoring the requests of bystanders to check on Floyd’s breathing. And for several minutes after Floyd appears to stop breathing, Chauvin keeps his knee on his neck, until paramedics arrive to carry his body into an ambulance.

“The paramedics drug [sic] my brother across the ground without administering CPR — they showed no empathy, no compassion,” he said.

George Floyd’s final words, “Please, I can’t breathe,” echoed those of Eric Garner, who died after police officers in New York City put him in a chokehold while arresting him in 2014. Garner was arrested for allegedly selling untaxed cigarettes, which he denied doing at the time of his arrest. But Garner never had a chance to prove his innocence. His death inspired the Black Lives Matter movement.

“They showed no empathy, no compassion.”

The accusation levelled against Floyd wasn’t selling cigarettes, but purchasing them with an allegedly counterfeit $20 bill. Like Garner, Floyd was presumed guilty — not innocent as was his right — and he was killed for it.

The owner of the store convenience store where Floyd purchased the cigarettes told CBS Local News that: “Most of the times when patrons give us a counterfeit bill they don’t even know it’s fake so when the police are called there is no crime being committed.”

But police never conducted an investigation into whether or not the bill was fake.

Floyd was presumed guilty — and that presumption is inextricable from the implicit and explicit racial biases of law enforcement. These biases also contribute to the use of excessive force and violence against people of color, in particular, young Black men. Data shows that victims of police violence are disproportionately Black.

Floyd’s death isn’t the first in Minnesota to raise a furor over police violence and racial bias.

In 2016, Philando Castile was pulled over in Falcon Heights, Minnesota, while driving with his girlfriend and her 4-year-old daughter. Castile informed the officer that he had a gun, which he had a permit to carry, as a precaution, and repeatedly stated that he was not reaching for his gun. Yet seven seconds later, the officer fired into the car killing Castile.

Several studies have found that predominantly Black and Latinx communities are more heavily policed than white communities, and that Black and brown people are more likely to be stopped, searched, and suspected of a crime (even when no crime has occured). Implicit racial bias can influence law enforcement’s investigation of crimes, leading some of them to narrowly pursue suspects who may fit their perception of a “criminal.” Studies have shown that many white people have a strong unconscious racial bias and associate Black people with criminality, so when presented with a suspect that matches these assumptions, they may not conduct a comprehensive investigation into other potential suspects. This is often the first step toward wrongful conviction.

A study by the Council on Crime found that in Minnesota specifically, law enforcement drivers of color at significantly higher rates than white drivers. The report showed that if police had stopped Black and white drivers at the same rate, they would have stopped 18,800 fewer Black drivers and 22,500 more white drivers. Once pulled over, the study showed that drivers of color are also more likely to be searched, but that these searches are less likely to result in the discovery of “contraband.” Just 11% of Black drivers were found to have contraband, compared to nearly a quarter of white drivers searched.

The council concluded that such patterns “suggest a strong likelihood that racial/ethnic bias plays a role in traffic stop policies and practices in Minnesota.” But the impact of racial bias isn’t limited to traffic stops. And when combined with the state’s failure to hold police officers accountable and to adopt policies that promote the de-escalation of violence and regulate the use of force, it can be deadly.

Minneapolis police officers have killed Black people at a rate 13 times higher than white people, according to Samuel Sinyangwe, a data analyst and co-founder of Mapping Police Violence, a platform that tracks police killing data. The disparity in rates is one of the largest in the country.

How the System Failed Ahmaud Arbery

How the System Failed Ahmaud Arbery

Officers Chauvin, who pinned Floyd down, and Tou Thao — who did not intervene despite the desperate pleas of bystanders and a 2016 policy requiring officers to intervene when witnessing the use of excessive force — have been the subjects of previous complaints of excessive use of force, the Guardian reported. But neither was terminated until this week, when all four officers involved in the incident were fired. None of the men have been charged or arrested.

Floyd’s death comes just weeks after a viral video of the killing of Ahmaud Arbery in Georgia prompted national outcry.

At the time of writing, protesters in Minneapolis are now in their third day of mass demonstrations, sparked by the death of “Big Floyd,” as Floyd was known to family and friends. The Texas native, who moved to Minneapolis for opportunity and a better life, is remembered as a proponent of peace, who advocated against gun violence.

His family is still hoping for justice for George, and for changes that will prevent such injustices from happening in the future.

The Innocence Project mourns the death of George Floyd and stands with his family and the people of Minneapolis in seeking justice.