From Running Stats to Running Miles 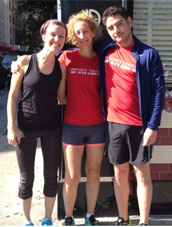 Photo: Sunday the team got together for a run up the Hudson River Greenway. From left to right: Vanessa Meterko, Nancy Katz and Jorge Linares.

Though I’ve run a few marathons in the past, my racing numbers tend to be unremarkable, but the numbers that we generate to understand and describe exoneration cases are anything but.

The number of people who have been exonerated through post-conviction DNA testing and proven innocent of crimes after years in prison. Damon Thibodeaux, who served

on death row in Louisiana after falsely confessing to a murder that he didn’t commit became the 300th DNA exoneration in September.

The percentage of DNA exoneration cases that involved false confessions or admissions. While most people can’t imagine confessing to a crime they didn’t commit, DNA exonerations and social scientists have proven that false confessions do happen and that they can be surprisingly detailed and persuasive. In fact, during an interrogation, investigators may inadvertently reveal details about the crime which a vulnerable suspect can then weave into a seemingly-credible confession.

The average number of years people wait to be compensated for their wrongful imprisonment, if they are compensated at all. Some are barred from receiving compensation if, for example, they falsely confessed or pled guilty to avoid a harsher sentence. The joy of freedom is often paired with the challenge of navigating a dramatically different outside world, and while money can’t restore lost years, it can help exonerees begin to rebuild their lives.

I admired the Innocence Project’s work for years before I joined the staff, and now I’m even more inspired. I’m surrounded by bright, dedicated co-workers who are passionate about social justice, and I’ve had the pleasure of meeting some of the exonerees who – while they each have unique experiences and perspectives – never fail to impress me with their enormous strength and grace. It’s because of these amazing people that I’m running, and fundraising, for the marathon team.

We need to continue to advocate for reforms like videotaping interrogations to help prevent future false confessions. We need to keep testing biological evidence to find the truth about cases in which imprisoned people claim innocence. And we need to maintain our Exoneree Fund to assist those who have been released but not yet compensated.

So if you can, please

, and if you’re in New York City on Sunday, November 4th, check out the

and come out to cheer for us! We’ll really appreciate your support.