Friday Roundup: Coming Together in Texas 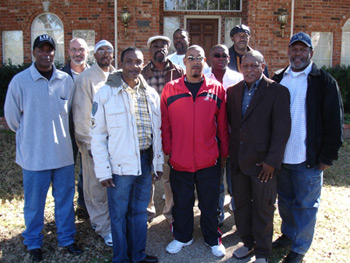 Exonerees and advocates were working around the world this week to spread the word about wrongful convictions and reforms to prevent injustice. Here are some stories we didn’t get to on the Innocence Blog:

can we avoid enormous human and financial costs later.” Center on Wrongful Conviction Director Rob Warden wrote about the Innocence Project’s upcoming U.S. Supreme Court case and the opportunity for the new U.S. Solicitor General-designate to

, who died of an asthma attack in prison while serving time for a rape he didn’t commit. Thirteen exonerees joined lawmakers, representatives of the Innocence Project of Texas and Innocence Project Co-Director Barry Scheck at the state legislature yesterday to

Exonerees elsewhere were also hard at work this week mentoring young people and educating the public about wrongful convictions.

about three exonerees who passed  away in recent years

Reader’s Digest this week published a

, who served 30 years in Massachusetts prison for a murder he didn’t commit.

at an International Human Rights event. Lesniak won the event’s top prize for his speech and $10,000 for his organization, the Road to Justice and Peace.