Freedom Friday: The Week in Review 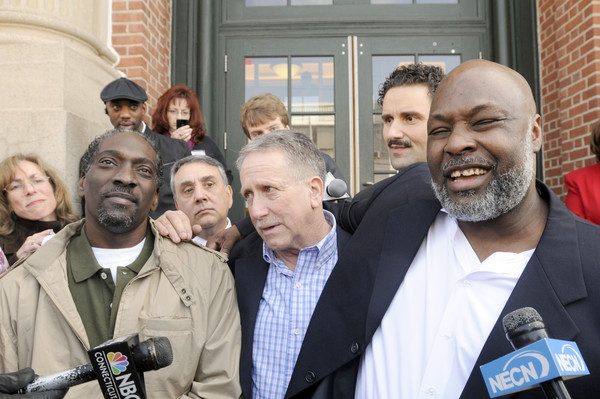 after serving 16 years in prison for a murder evidence shows they didn’t commit. A state judge threw out the convictions of Ronald Taylor (left) and George Gould (right), but ordered them to wear GPS monitoring bracelets while prosecutors appealed the decision. Private investigator Gerry O’Donnell (center) played a key role in discovering evidence of their innocence.

an op-ed today in the Boston Herald

, Betty Anne Waters wrote that the 18 years her brother Kenny spent in prison for a rape he didn’t commit should be reason enough for Massachusetts lawmakers to act on critical reforms in the state. Waters’ fight to free her brother is the focus of

has been eight years in the making

, and their invitations read:  “Love: 1 Injustice: 0.” Shomberg served six years in Wisconsin prisons before DNA testing obtained by the Wisconsin Innocence Project demonstrated his innocence and led to his release in November. He says he’s looking forward to building a new life with Anello. “Life is extremely short,” he told the Wisconsin State Journal. “With the time I have left, I want to make the best of it. I want to give back to the people who have stood by me over the years.” Also in Connecticut this week, a state  House of Representatives committee

, sending the legislation to the full House.

d after a state audit found this week that the lab was “sacrificing quality for quantity.”

An editorial in the Lincoln Journal-Star

said the conviction of Douglas Country, Nebraska, CSI chief David Kofoed “will be a powerful deterrent to other investigators who might be tempted to take justice into their own hands.”

New York University’s Arthur L. Carter Journalism Institute posted nominees for its award honoring the top Ten Works of Journalism of the last decade — and David Grann’s story on the Cameron Todd Willingham execution in Texas made the impressive list. The top ten will be announced Monday;