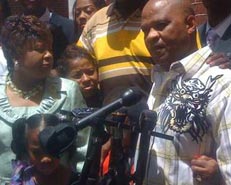 Ernest Sonnier (above) was freed in Texas on August 7 after DNA testing obtained by the Innocence Project proved his innocence of a 1985 rape for which he was wrongfully convicted. His is the latest in a string of cases in which faulty forensics at the Houston Police Department Crime Lab played a role in a wrongful conviction. A two-year audit of the lab found questionable testing in many cases that still must be evaluated for possible retesting.

Learn more about his case

Nationwide, people have been wrongfully convicted – while actual perpetrators of crime remained at large – because unvalidated or improper forensic science led investigators astray. Too many forensic science disciplines have never been subjected to rigorous scientific scrutiny. Even when the science is solid, forensic analysts sometimes conduct their testing improperly or misinterpret results. In some cases, forensic analysts falsify results or engage in other misconduct.

After an unprecedented report earlier this year from the National Academy of Sciences found serious problems with forensic practices in the U.S., the Innocence Project called for the creation of a federal Office of Forensic Science Improvement and Support to oversee and support forensics throughout the country. Learn more about this critical reform and add your voice to a petition calling for forensic reform at


Forensic Science in the News:

investigating the role of faulty forensics in wrongful convictions and focusing on the case of Ernest Sonnier.

. He was convicted based in part on testimony regarding an FBI ballistic test that has since been discredited.

Dog scent evidence is among the forensic fields widely considered to be lacking in scientific rigor. One dog handler in Florida, John Preston, was involved in two wrongful convictions later overturned by DNA testing – the cases of Wilton Dedge and William Dillon.

Dedge marked the fifth anniversary of his exoneration last week, but questionable convictions involving Preston have still not been subjected to an independent review

explores the problems with many forensic disciplines and focuses on two recent Innocence Project exonerations that highlight the consequences of a lack of forensic science research, standards and oversight.