Free At Last! Angel Gonzalez Is Released After Nearly 20 Years in Prison 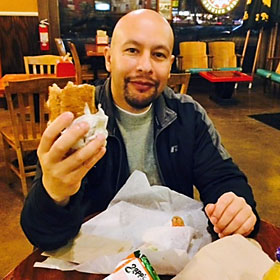 Angel Gonzalez enjoys his first sandwich as a free man shortly after being released from prison.

Yesterday evening, Angel Gonzalez walked out of the Dixon Correctional Center in Illinois a free man. Gonzalez was exonerated Monday of a 1994 rape and abduction conviction which put him in prison for more than 20 years of a 55-year sentence. Recent DNA tests excluded Gonzalez as one of two rapists in the case and State’s Attorney Mike Nerheim agreed to ask for Gonzalez’s freedom in light of this new evidence. While the conviction was vacated on Monday, Gonzalez was not freed immediately because while in prison he had been given a sentence of three years for breaking a sink while he was in solitary confinement.

reports that Gonzalez’s lawyers, Vanessa Potkin of the Innocence Project and Lauren Kaeseberg of the Illinois Innocence Project, returned to court yesterday to argue that the property damage conviction be vacated as well. They argued that the crime had occurred while Gonzalez was wrongfully in prison and that Gonzalez, who speaks limited English, had pled guilty to damaging the sink without an interpreter present. A judge agreed to vacate the property damage charge, and yesterday evening around 7:00 pm, Gonzalez was finally released. “I’m free,” he said, according to the

Gonzalez thanked his family, his supporters, his lawyers, and the criminal authorities who helped him prove his innocence and who made his release possible. Now Gonzalez is willing to put the past behind him and focus on making the most of his freedom. Gonzalez said, “To be here today is making me feel alive again,” wrote the

. While in prison, Gonzalez earned his high school diploma. He also spent time painting and is looking forward to continuing with his art and his education.

Upon his release, Gonzalez headed home to Waukegan where he was reunited with his family. His mother, Maria Gonzalez said that the family planned a party for Angel with his favorite foods as a way to welcome him home and make up for all of the family events he missed out on while in prison. The family is thankful that Angel has been released in time to be with his parents. Angel’s brother Saul Gonzalez worried that they wouldn’t live to see Angel walk free—a fear that was bolstered when their father suffered a stroke last year. “Right now, everybody is saying, finally, there is justice for him,” said Saul Gonzalez, according to the

There is one final hurdle for Gonzalez to clear now that his freedom has been granted. In 1994, Gonzalez, who is a Mexican national, had a visa which expired after he was arrested. The Innocence Project has been informed that an immigration hold on Gonzalez has been lifted, which will allow him to remain in the United States while he seeks citizenship.

For now, Gonzalez’s family will help him readjust to life outside of prison. Speaking for his brother, reported the