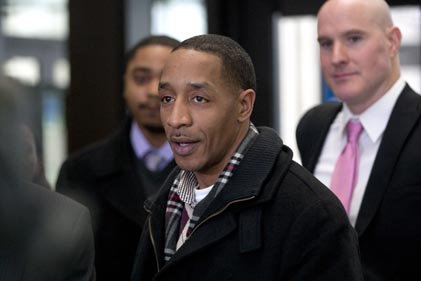 Caption: Terrill Swift speaks to reporters after the exoneration hearing.

Yesterday, four men were exonerated by DNA evidence in the 1994 murder of Chicago sex worker, Nina Glover. Their case has received national attention and has spotlighted the problem of juvenile false confessions. The State Journal-Register reports:

After the hearing, Swift said he was relieved and ready for the phrase “Englewood Four” to become symbolic of flaws in the justice system. The four men have become known by that name.

Swift has been hired at a tire store in the Chicago suburbs and hopes to study criminal justice. He said he expects to always keep in touch with the other three.

In just the last four months, ten people from Illinois have been exonerated after years of wrongful imprisonment because of confessions they gave as teenagers. False confessions played a role in 28% of all the 289 DNA exoneration cases, and young people have been shown to be particularly susceptible.

Stay informed about the latest news from the Innocence Project: