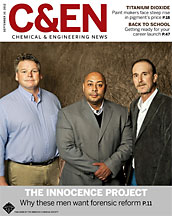 At a recent American Chemical Society (ACS) symposium in Philadelphia, forensic scientists, attorneys and criminal justice reform advocates gathered to discuss how flawed forensic science can lead to wrongful convictions and how to prevent them. The Chemistry and the Law Division of the ACS led the conversation on how forensic science can play a tragic role in convicting the innocent. Exonerees who had been wrongfully convicted based on flawed bite mark analysis, hair microscopy and other unvalidated disciplines spoke about the battle to prove their innocence.

DNA testing has undergone thorough scientific vetting but other forensic tests lag behind DNA in several ways and little to no research has been conducted toward standardizing them or defining their error rates, reported


In Philadelphia, Innocence Project cofounder Neufeld asked ACS members to get involved in developing standards for forensic science. He also urged ACS to stand behind two bills making their way through Congress that would mandate changes to how forensic science in the U.S. is funded, organized, and regulated. Forensics have been in the federal limelight since a 2009 National Research Council report found much of the science in crime labs wanting (C&EN, June 25, page 32).

Change is going to take time for forensic science, says Cedar Crest’s Brettell. “Everybody has the same goals in mind,” he says. But the legal community and the crime labs “are coming from two different directions.”