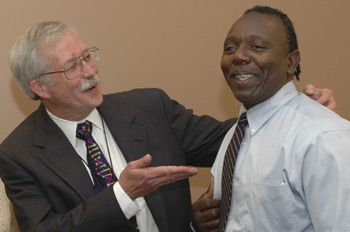 Two men who spent decades in prison for crimes they didn’t commit told their stories last week to students at the University of Tampa. Alana Crotzer and Larry Bostic spent a combined 42 years in prison before DNA testing exonerated them and led to their release.

Crotzer (above right, with DNA analyst Ed Blake, whose lab conducted testing in Crotzer's case) talked about work he does today mentoring teens in the state department of juvenile justice. He said he is readjusting to life outside of prison, and only looking forward.

More than one-third of exonerees were arrested between the ages of 14 and 22. They lost the prime of their lives for crimes they didn't commit.