Florida Exoneree Becomes a Father at 57 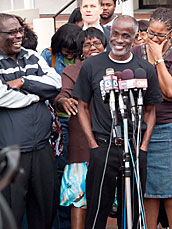 James Bain was just 19 when he was wrongfully convicted of a Florida kidnapping and rape. Thirty-five years later, his conviction was overturned and he was released in late 2009. Now, just over two years after his release, he’s living the life of his dreams—married, and the father of a brand new baby boy, James Junior. Says Bain:


“I thought I’d never, ever see this point in my life, where I have my own child.”