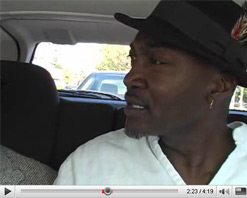 Today marks the fifth anniversary of

's exoneration in Louisiana. After serving 21 years in prison for a crime he did not commit, Willis was finally released when post-conviction DNA testing excluded him as the perpetrator of a 1981 rape.

In June 1981, an intruder entered a home in Shreveport, Louisiana, where three girls (aged 7, 9, and 10) were sleeping. The 10-year-old awoke to a man standing above her. The attacker proceeded to choke her and banged her head against the wall. The victim fled to the back yard, but the perpetrator caught up, kicking her in the stomach. During the struggle, the victim lost consciousness and was sexually assaulted. Police were not contacted until the next morning, when a woman returned to the house.

Although police said one of the girls identified Willis as her attacker, the girl later said she never saw Willis’ photo and she did not identify him in court. He was also considerably smaller than the attacker described to police by the girls. A rape kit was collected from the victim, and semen from the perpetrator was identified, showing that the perpetrator must have type O blood. Calvin Willis has type O blood, as do 49 percent of African-American men in the United States. This evidence was presented at Willis’ trial to show that he could have been the attacker.

In 1998, the Innocence Project began to search for evidence in Willis’ case. DNA testing on items from the crime scene proved that another man was the attacker and led to Willis’ release on September 18, 2003. He was officially cleared on September 23, 2003.

Upon his release Willis said, "People don't know what exonerated is. When you have been in prison for 20 years there is a stigma. I am going to file for a full pardon from the governor." Two years after Willis was exonerated, Louisiana passed a law compensating the wrongfully convicted for $15,000 per year served, up to a maximum of $150,000. (The federal standard is $50,000 per year.) Willis, however, has yet to be compensated.

Watch a video interview with Willis and his friend, exoneree Rickey Johnson,