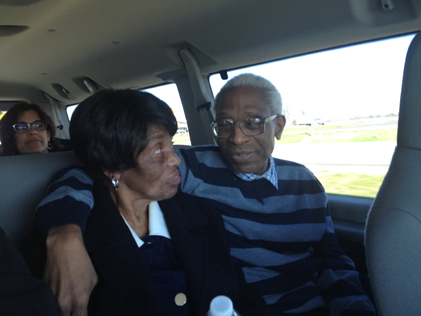 Last winter, after 30 years of wrongful imprisonment, George Allen returned home to his mother’s house in St. Louis, Missouri. Innocence Project Attorney Olga Akselrod asked him what he most looked forward to about life in the free world, and he responded that he wanted to help his mother and take care of her. “They have a beautiful bond,” says Akselrod.
Allen’s mother, Lonzetta Taylor, “81 years young,” fought tirelessly for Allen’s exoneration and provided a constant source of strength and support. When he was finally freed, in November 2012, he walked into the courtroom and went immediately to embrace her. She told reporters, “I hadn’t touched him in years. We’ve always spoken behind a glass. There are no words that could describe how that felt.”
Then he moved in with her. She says, “Everybody was just so glad to see him and glad he was coming home, but I didn’t know how he would accept the fact that he was coming to this house. I didn’t know how he would adjust to the neighborhood because there’s been a lot of changes.”
Mother and son had changed over the years, too. “What I didn’t realize,” she says, “was that George was getting up at four in the morning because that’s what he did in prison. I wasn’t getting enough sleep. Then, I realized that I have to adjust to him, and he has to adjust to me.”
For