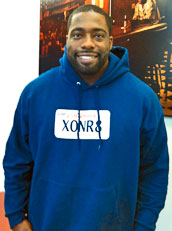 Nearly one year after kidnapping and rape charges against a former Southern California high school football player were dismissed, Brian Banks’ dreams to play professional football were fulfilled Wednesday when he inked a deal with the Atlanta Falcons.

The alleged victim claimed that she had been forced to the school’s basement and raped without a condom, but DNA testing did not find sperm on her underwear. Banks was exonerated after the alleged victim was video recorded denying that any crime had taken place.

As a collegiate prospect with a verbal commitment to play at the University of Southern California, Banks was forced to set aside his dreams in 2002 when he took a plea deal to avoid trial and the risk of a lengthy prison sentence. After a five-year stint in prison he was forced to register as a sex offender and wear an electronic monitoring bracelet.

Following his exoneration last May, Banks, who was represented by the

, received calls from several professional football teams and was invited for workouts and tryouts.