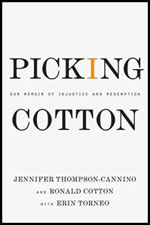 Jennifer Thompson was 100% sure she had the right guy. She had been attacked and raped in her home and had made an effort to study the perpetrator’s face. After the attack, she worked with police officers to create a composite sketch. A call came in that led investigators to a man named Ronald Cotton. She then identified him as her attacker. Based largely on her testimony, Cotton was convicted and sentenced to life in prison.

Fast-forward 11 years later. Thompson gets a knock on her door. Police officers tell her DNA testing has been conducted in Cotton’s case and has proven him innocent and implicated the real perpetrator, a man named Bobby Poole. She was shocked at first, but soon came to realize that eyewitness misidentifications aren’t at all uncommon.

Cotton was exonerated and released, and today he is good friends with Thompson. They travel around the country working to spread the word about wrongful convictions and reforms – especially to eyewitness identification procedures – that can prevent future injustice. Their story shows how eyewitnesses can make mistakes, and it also makes the case for

. Several states, counties and cities have adoped these reforms – some after hearing Cotton and Thompson’s remarkable story. Thompson recently spoke at a National Institute of Justice conference in Florida, and both she and Cotton were the keynote speakers at a recent Innocence Network conference.

,” a new book written by Cotton and Thompson (with Erin Torneo), tells the story of the injustice suffered by both and their inspiring efforts to use their experience to bring about improvement in the criminal justice system.

More on the new book and eyewitness misidentification:


Order Your Copy of “Picking Cotton”

(A portion of proceeds benefit the Innocence Project)

inviting Jennifer Thompson to speak at an event


Watch a Video with Cotton and Thompson