Faulty Science and the Wrong Man on Death Row 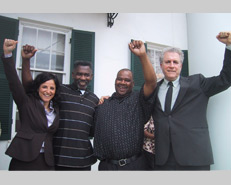 was sentenced to death in Mississippi for allegedly raping and murdering his girlfriend’s three-year old daughter. Although his conviction was overturned in 2001 after seven years on death row, he would spend another five years in jail, and two years free on bond, before he was finally exonerated two years ago this week.

Dr. Michael West, a bite-mark analyst who has since been discredited, provided critical testimony for the prosecution. West was brought into the case by Dr. Steven Hayne, a medical examiner who lacks proper board certification and whose work

has also been discredited

. At trial, West told the jury that Brewer had bitten the girl 19 times using only his upper two teeth, and that marks on the victim’s body conclusively matched Brewer’s dental records. In fact, experts say that the marks weren’t even caused by human teeth.

West’s procedures and findings have come under fire in numerous cases. He claims to have invented the “West Phenomenon,” in which he donned yellow goggles, and, using a blue laser, identified bite marks, scratches and other marks that only he could see. West also claimed to have conclusively identified a perpetrator from bite marks on a bologna sandwich. That conviction was later overturned. In 2001, a defense lawyer sent his own dental mold and photographs of bite marks on a victim’s breast to West, along with his $750 retainer. West produced a video for the lawyer in which he concluded that the mold and photos were a definite match.

In its 2009 report on forensic science, The National Academy of Sciences criticized the relatively new field of forensic odontology, because there is no widely accepted way to measure the reliability of bite marks, no national database to compare samples and a lack of extensive peer review and research. To remedy these problems, the NAS recommended the formation of a national entity to supervise and support forensic science, including bite mark analysis. Learn more about improper and unvalidated forensic science and read the full NAS report

Citing West’s original testimony, the Mississippi State Supreme Court affirmed Brewer’s conviction and death sentence in 1997. DNA testing performed in 2001 showed that he could not have committed the crime and led to his conviction being overturned. Prosecutors, however, said they intended to retry him.

Brewer remained in jail awaiting the promised trial until 2007, when he was freed on bond — with a trial still pending. The next year, an Innocence Project investigation led to further DNA testing, which implicated another man as the perpetrator. The real perpetrator then confessed to committing the crime, and a similar crime for which another man — Levon Brooks — had been wrongfully convicted as well.

Brewer says he’s not angry about the injustice he suffered and instead wants to focus on moving on with his life. He met his future wife in a program after his exoneration, and plans to get married this April. Brewer also has two children and a grandson. He currently works at a food processing plant in Brooksville, Mississippi.