Exonerees Who Served in the Military Observe Memorial Day 2012 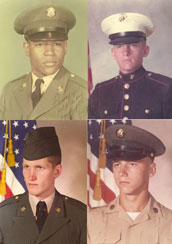 
Before their wrongful convictions, many of the DNA exonerees served in the U.S. armed forces. Former Marine Kevin Green, who was exonerated through DNA in 1996, will participate in his local Memorial Day ceremonies in Jefferson City, Missouri. He says, “Memorial Day is to honor those who served and gave their lives to protect our freedoms. Because of them, we must realize that freedom is not free. We work to protect it every day.”

Former Army Sergeant Dennis Maher, exonerated through DNA testing in 2003, says “Because of my wrongful conviction, I missed the opportunity to serve my country because I was going to be a career soldier. I think about that on Memorial Day.” Maher served almost six years on active duty before he was wrongfully convicted in 1984.

Like many other exonerees, Green and Maher still work to protect individual freedoms and civil liberties by speaking publicly about their wrongful convictions and advocating for criminal justice reforms.